U.S. Is a Climate Rogue State 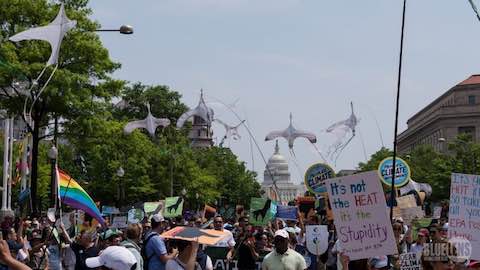 U.S. Is a Climate Rogue State

It's time for the world to consider sanctioning the United States and companies who benefit from its efforts to undermine climate action.

From its wars in the Middle East to its dangerous escalation with North Korea, the United States is no stranger to flouting international law. However, in no area has it shown its contempt for the rest of the world -- and for common human decency, not to mention common sense -- as systematically as it has on climate.

Like charity in the old cliché, climate action starts at home. The U.S. government under Donald Trump's leadership has started ripping up even the partial steps the Obama administration took to reduce America's greenhouse gas emissions, which are already among the highest in the world.

Meanwhile, it is recklessly expanding domestic fossil fuel production (including in ecologically sensitive areas) and transportation (never mind the resulting accidents). It plans to subsidize coal use, ignoring the findings of the government's own experts who concluded that renewables are better for the electric grid.

Of course, basic science dictates that any nation's domestic climate policies have international impacts. If a country with high emissions to begin with pumps even more greenhouse gases into the atmosphere, the resulting heat waves, droughts, storms, floods, and sea level rise don't stay confined within the country's borders.

By rolling back domestic climate protection policies and expanding fossil fuel use at home, the U.S. has effectively declared war against island nations facing annihilation by rising seas, sub-Saharan African farmers facing record droughts, South Asians dealing with unprecedented floods, and many more people worldwide, most of them poor and vulnerable.

And from Texas to Puerto Rico, it's also a war against many of its own citizens dealing with the same horrific impacts.

Then, of course, there's Trump's plan to exit the Paris climate accord -- which, while flawed and lacking in ambition (and non-binding to boot), is the world's first concrete multilateral climate action plan to go into effect. That leaves the U.S. as the only country on earth that's not party to the agreement -- a true rogue state.

Far from working with other countries to make the accord more stringent, the Trump administration has peddled the ridiculous falsehood that meeting the greenhouse gas reduction targets the U.S. had committed to in the accord would harm the U.S. economy. (Never mind the facts, which show that solar and wind energy are competitive with fossil fuels even before accounting for tax credits, and are already creating way more jobs than coal in spite of constituting a much smaller share of the electric grid.)

In the recently concluded COP23 climate talks in Bonn, Germany, the Trump administration tried to take its propaganda to the international stage by holding an event promoting fossil fuels. The panel of speakers was stacked with coal, oil, and gas industry hacks. The event was disrupted by protesters from frontline communities and student and youth organizations in the U.S., showing the degree of domestic opposition to the administration's climate and energy agenda.

On a positive note, a coalition of U.S. governors and mayors formed what was effectively an "alt-U.S. delegation" to the Bonn talks, participating in discussions and holding their own events. There is much to critique in their position, including their love of false "market-based" solutions, but their very presence weakens the international standing of the White House in these arenas.

Fortunately, the rest of the world ignored the Trump administration's tantrums and continued to engage in serious efforts to tackle the existential threat of climate change, leaving the U.S. even more isolated on the world stage.

If the world is to neutralize the destructive global agenda of the U.S. government, though, it will take a lot more than ignoring the U.S. and continuing with climate talks -- or posting videos recruiting U.S. scientists to move to France, or the occasional statement of condemnation. If the world community wants to provide meaningful support to the broad social movements in the U.S. who are fighting back against the administration's agenda of enriching fossil fuel oligarchs at the expense of most of humanity, they need to match their words with action.

It's time for the world community to start thinking about economic sanctions against the U.S. and against companies who benefit from the U.S. fossil fuel production boom, as a first step to hurt this rogue administration and its oligarch puppet masters in the pocketbook.