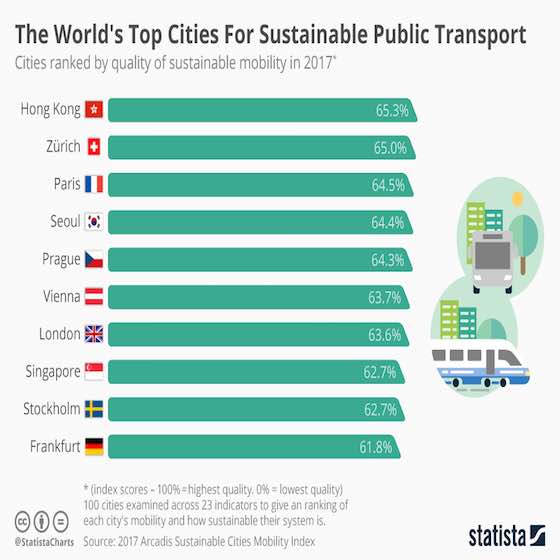 Hong Kong has been ranked the top city worldwide for sustainable transport in the 2017 Sustainable Cities Mobility Index from Arcadis.

The research examined 100 major cities across 23 different indicators to give an indicative ranking of the mobility and sustainability of their transportation systems. Hong Kong leads the pack thanks to its well-connected and innovative transport network which handles an impressive 12.6 million passenger journeys every day. It is also cheap by international standards and it accounts for 90 percent of all daily journeys in the Asian metropolis, the highest rate of any city in the world.

Two other Asian cities, Seoul and Singapore, are in the top-10. The latter generally scored well but its urban mobility score slipped because its cycling infrastucture needs improvement.

The rest of the top-10 was dominated by cities in Europe with Zürich, Paris, Prague, Vienna, London, Stockholm and Frankfurt all present. The best city in the ranking was New York, though it only came 23rd overall. That might actually be surprising to some New Yorkers who lose a collective 35,000 hours every weekday waiting for trains that do not show up. Nevetheless, the Big Apple did generally well as its subway system is very extensive and operates 24 hours a day. In addition, the city also has important train connections to Long Island and New Jersey. It also scored well in the "People" category, gaining points for rider connectivity and once again maybe surprisingly, access for wheelchair-bound passengers.