The Devastating Effect of Pollution 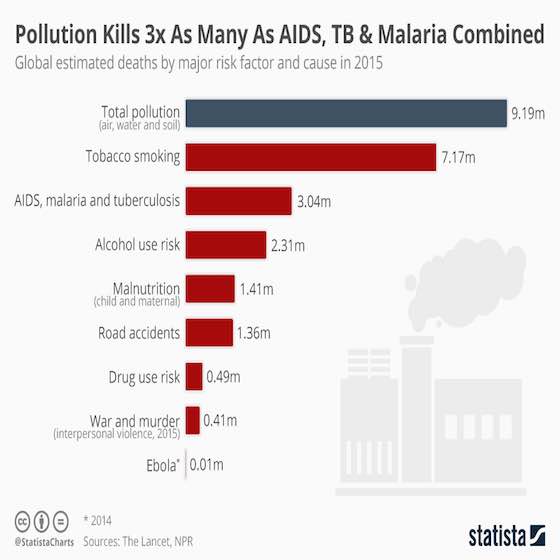 The Devastating Effect of Pollution

Pollution kills three times as many people as does AIDS, TB & Malaria combined. This chart shows global estimated deaths by major risk factor and cause.

Polluted air, water and soil caused around 9 million premature deaths around the world in 2015, according to a recent report in the Lancet.

Broken down, air pollution had the highest risk factor, contributing to 6.5 million deaths while water and soil were linked to 1.8 million and 800,000 deaths respectively. Most of the deaths occurred in low and middle-income nations with Bangladesh, Somalia and Chad especially badly affected, with pollution linked to over a quarter of deaths in all three countries.

In 2015, India had 2.5 million premature deaths due to pollution while in China, the figure was 1.8 million. In the United States, it was linked to 5.8 percent of all deaths, 155,000 in total. The Lancet's figure of 9 million pollution-related deaths makes up 16 percent of all deaths worldwide. Pollution now kills three times as many people as AIDS, tuberculosis and malaria combined. Additionally, it causes 15 times as many deaths than war and violence.

Environment: "The Devastating Effect of Pollution"