Portland an Example for the World 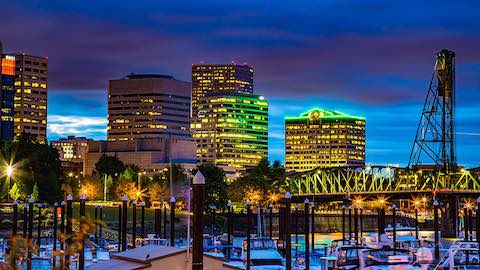 Portland an Example for the World

Portland, Oregon could teach the world a thing or two about climate laws that count.

France was celebrating the Paris Climate Agreement, which came into force. It was a remarkable achievement.

Less than a year after 196 countries signed the accords, over two-thirds of the world's countries -- including the two biggest greenhouse gas emitters, the U.S. and China -- ratified it, agreeing to an upper limit of 2 degrees Celsius in atmospheric warming.

But with Donald Trump's ascendancy, and his pledge to withdraw from the Paris Agreement, the world is back to an uncertain climate future.

While some mourn the possibility that the Paris Agreement will be undone, it’s important to remember that it was always aspirational.

After all, the deal offers no timetable for ratcheting down consumption of fossil fuels, and no sanctions for countries that fail to meet targets. The deal promises a small amount of assistance to developing countries fighting climate change, but most of that is merely repackaged development aid.

More frighteningly still, the world's existing fossil fuel infrastructure and proven wells and mines will sail us right past the 2 degree upper limit if they're all exploited.

So what’s to be done?

One path forward is emerging from the clear-eyed citizens of Portland, Oregon, who are pioneering a more proactive, locally-led path forward.

A year ago, Portland's city council unanimously voted to “actively oppose expansion of infrastructure whose primary purpose is transporting or storing fossil fuels in or through Portland or adjacent waterways.”

Much of Portland's fossil fuel infrastructure lies in an industrial zone that, should an earthquake come, would rapidly turn to Jell-O. And oil train derailments -- like the one earlier this year in nearby Mosier, Oregon -- can cause out-of-control blazes.

Respect for indigenous communities is another factor. The Standing Rock Sioux's protest against the Dakota Access Pipeline is a reminder that Native treaty rights are routinely flouted by the fossil fuel industry. It happens here in the Northwest, too.

But climate science is the central piece. A recent study found that if we are to maintain a mere 66 percent chance to avoid passing that 2 degree limit, no more new major fossil fuel infrastructure can be built.

In fact, we must actually leave many proven reserves untapped and begin to dismantle existing fossil fuel infrastructure.

President Obama did the right thing in signing the Paris Agreement. He also took a bold step in issuing guidelines for federal agencies to disclose greenhouse gas emissions associated with major infrastructure projects, like the Dakota Access Pipeline, and consider alternatives should the impact be significant.

But at this moment in time, neither is sufficient.

If Obama takes one final bold action before leaving office, it should be this: He should impose his “climate test” on the Dakota Access Pipeline and ensure that Native American treaty rights are respected.

But in the years to come the real action will be at the local level.

Portland Mayor Charlie Hales is showing the world what a first step might look like. Portland's city council will vote on what is likely the strongest land use code language in the country prohibiting all new fossil fuel export infrastructure.

Should it pass and become binding law, we'll know who the real world leaders are. Paris -- and the rest of the Paris Agreement signatories -- would do well to follow Portland's lead.

And if you do, back home in our evergreen city, we'll raise a glass of microbrew in your honor.

Daphne Wysham, an Institute for Policy Studies associate fellow, is the director of the Center for Sustainable Economy's climate and energy program in Portland, Oregon.

Environment: "Portland an Example for the World"