How Climate Change Affects Your Health 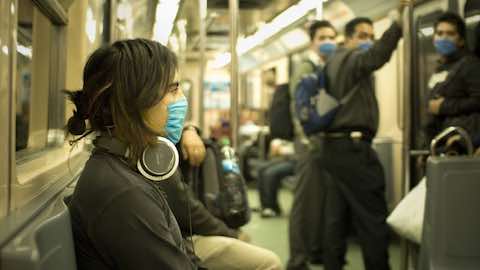 The term "universal agreement" is almost an oxymoron given how infrequently everyone can agree on something. However, that's exactly what the UN Climate Change Conference in December of 2015 hoped to achieve -- a universal agreement on climate, from all nations of the world.

Unless you live under a rock, this probably isn't the first time you've heard of climate change (or its dire implications). The decade from 2000-2010 was the warmest on record, and the global average temperature rose 1.4 degrees Fahrenheit in the past century.

According to the Environmental Protection Agency, these rising global temperatures are accompanied by other changes, such as more frequent and severe heat waves and more intense rainstorms.

Long heat waves can alter the growing seasons such that there is more pollen in the air, which exacerbates many respiratory allergies and diseases. Additionally, increased global temperatures contribute to the depletion of stratospheric ozone. This results in increased UV radiation exposure, which can cause skin cancer and cataracts.

These changes affect the habitability of our planet by making it less temperate and negatively impacting our health. Using data from the U.S. Global Change Research Program's report, "A Human Health Perspective on Climate Change," HealthGrove examined these variables and how they might affect certain diseases.

Extrapolating from this information, diseases most adversely affected by heat, extreme weather events and pollution should see the biggest increases in worldwide health impact.

Climate change will affect air quality in several ways, including increased amounts of ozone, fine particles, dust, pollen and mold spores. These pollutants can exacerbate respiratory diseases, such as asthma.

Studies associate fine particulate matter with negative cardiovascular outcomes like heart attacks and deep vein clots. Though incidence in the U.S. is generally low, the disease might become more ubiquitous with increased pollution.

Cholera, caused by the bacteria vibrio cholerae, may see increased incidence in the future as ocean temperatures rise.

As a result of climate change, increased pollution might contribute to an increased burden on society from lung cancer.

Global warming also causes shifts in the ranges of disease vectors (small organisms that carry pathogens from person to person -- such as ticks) that thrive in specific environments. The warmer temperatures increase the threat in humans for Lyme disease, among others. Though the prevalence of this disease in the U.S. is currently low, public health officials should monitor its transmission as temperatures rise.

Depletion of stratospheric ozone results in increased UV exposure, which contributes to skin cancer formation. Given the already increasing rates, this is a public health concern.

This depletion of stratospheric ozone and increased UV exposure can cause cataracts, one of the most common culprits of vision loss.

Extreme heat exacerbates cardiovascular disease. As temperatures rise, so do the numbers of cardiovascular hospital admissions. Those in less developed countries might bear a heavier burden from this.

This vector-borne disease is transmitted by ticks. As temperatures increase, a degradation of rural and urban climate and sanitation conditions could increase the regions of tick migration. This could contribute to increased prominence of the plague.

Extreme heat increases rates of stroke. Elderly and isolated individuals are most susceptible to stroke due to these temperature changes. Though rates in the U.S. have slowly been decreasing, this might change as temperatures rise.

This disease is transmitted by a waterborne microorganism known as Legionella. It lives in cooling ponds and is transmitted through air conditioning systems. Since higher temperatures lead to more A/C use, this could mean increased incidence of Legionnaires' disease.

Vibrio, a naturally occurring marine bacteria that causes food poisoning, are sensitive to temperature changes. Outbreaks of this bacteria have been linked to warmer ocean temperatures. As the ocean warms, this could increase their migration and thus, the incidence of foodborne illness.

More frequent and extreme weather events can lead to increased destruction and more stressful living environments. Different people might experience mild increases in stress, while some could get anxiety or fall into depression. Though Americans in general experience low to medium rates of depression, this may increase with climate change.

Campylobacteriosis, transmitted by the campylobacter bacteria, causes food poisoning. Though incidences in the U.S. have been going down, this bacteria migrates more as ocean temperatures rise, which could lead to increased rates of this foodborne illness.

Warmer water temperatures will also increase the migration of the bacteria Salmonella, and therefore the incidence of Salmonellosis.

Hantavirus, characterized as a vector-borne and zoonotic disease (VBZD), is similar to Lyme disease. Highly influenced by climate change, many scientists believe that warmer temperatures will make certain environments more suitable for these diseases, thus worsening their effect on humans.

Drought encourages the spread of the mold Aspergillus Flavus, which produces aflatoxin. This toxin is linked to liver cancer in people that consume contaminated corn and nuts.

Like with malaria, the habitats of mosquitos carrying this disease might move further north as global temperatures increase. The incidence of dengue is already on the rise, the this would further exacerbate the increased incidence.

Extreme heat waves increase the incidence of heat stroke. This will likely impact poorer people disproportionately, as well as city-dwellers.

Malaria transmission increases with temperature and humidity. The habitats of two mosquito vectors of malaria currently range as far north as Mexico, and with warmer climates, would presumably expand northwards into the U.S.

Caused by a waterborne parasite, schistosomiasis may see an increased prevalence with climate change due to warmer water temperatures and increased precipitation. This disease is usually diarrheal, though waterborne pathogens are also implicated in various other illnesses.

Another vector-borne zoonotic disease, E. Coli circulates more in warmer climates. This disease is already on the rise, and warmer water and more precipitation will put our population at increased risk for this type of disease.

Currently, Americans rarely see yellow fever due to intentional programs to control these vector-borne and zoonotic diseases with vaccinations and improved sanitation. A degradation of climate and sanitation conditions could bring yellow fever to prominence again.

Learn More About These Diseases On HealthGrove

"How Climate Change Affects Your Health"