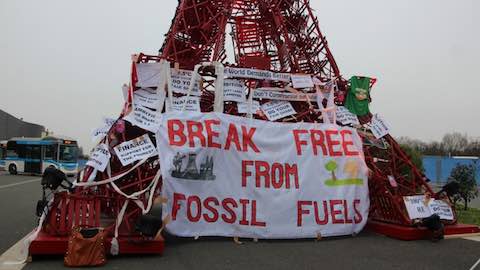 Washington just made a $500 million down payment on climate resilience in the developing world. But the fund's choice of financial partners is raising some eyebrows.

Recently, the United States made a long-awaited $500 million deposit to the Green Climate Fund -- a new global institution with a mandate to help developing countries build clean energy, climate-resilient economies. As the world's leading historical polluter, the U.S. has pledged $3 billion to help capitalize the fund.

The funds were released as the leadership of the GCF gathered in Songdo, South Korea to decide, among other things, which private banks, public agencies, and international institutions will be allowed to channel financial contributions.

Getting money into the hands of governments and communities in the Global South to address climate change isn't just an environmental imperative. It's also an equity issue. Faith and development groups see these funds as critical to enabling people in developing countries to meet their basic needs for energy access, food security, and viable livelihoods -- all the more so because the United States is responsible for a quarter of the climate pollution released into the atmosphere since industrialization.

So while this initial $500 million is a welcome contribution, the Obama administration's climate justice legacy will rest on whether Washington can come up with the remaining $2.5 billion it's pledged. One of the most innovative ideas for raising that money is a tax on financial speculation, which could generate tens of billions each year. The idea is already moving forward in 10 European countries and gaining popularity in the United States, too.

While the quantity of money in the Green Climate Fund matters, so does the quality of the partners that the money flows through. The fund's board of directors recently approved two new controversial partners -- HSBC and Credit Agricole. Both banks are major financiers of coal and have had human rights concerns raised against them. HSBC in particular has been embroiled in financial scandal, including allegations of laundering drug money.

The Green Climate Fund's leadership did attach some conditions to HSBC's approval, including anti-money laundering compliance mechanisms. And it decided to assess the portfolios of accredited partners to see what they're spending on coal and oil. The fund will measure how those investments change over a five-year review period to determine whether partners are truly committed to helping bring about low-emission, climate-resilient development.

Still, several developing country board members were upset by an apparent double standard applied to potential partners from low-income countries. For example, while HSBC was fully accredited even with its bad financial track record, the Ethiopian Ministry of Finance and Economic Cooperation was only certified to support small projects on the grounds that it lacked a strong project finance track record.

Concern was also raised that with the approval of this most recent slate of partner institutions, large multilateral and commercial banks far outnumber national or regional entities that can administer GCF money.

Indeed, discussions at the Sondgo board meeting revealed that around 90 percent of the climate financing that the fund expects to approve in 2016 would be channeled through large international partners rather than national institutions. This puts at risk one of the fund's founding principles of devolving responsibility to the local and national level -- a concept known as “country ownership.”

If it's going to spur a meaningful shift toward clean development led by the countries most impacted by climate change, the Green Climate Fund should align its choices in partners and projects with the recent Paris climate agreement's goal of keeping global warming as close to 1.5 degrees Celsius as possible.