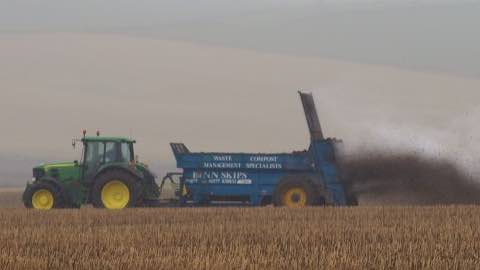 Because our economic system squeezes small farmers, even the most eco-conscious among them have to compromise their values to stay in business.

I visited a family farm recently. It was small, and local, and certified organic. In theory, it was everything an eco-conscious foodie could want. And yet, it wasn’t.

Like every farm family, the couple who runs the farm is constrained by economic factors.

Unfortunately, the measures they’ve taken to make their finances work have made their farm less environmentally sustainable.

Their biggest expense is labor, so they do everything they can to reduce the amount of labor they need, including employing machines. A lot of machines. Machines that run on fossil fuels.

They use tractors to plow, plant, and weed the fields. They frequently disturb the soil this way, because herbicides aren’t organic, and hand weeding is too expensive.

They get a few extra weeks of productivity and added income from extending their growing season by lining the ground with plastic to heat the soil. Then they throw the plastic away.

They don’t raise livestock because animals are too risky. A predator or a disease can come in and wipe out your chickens, and there go all of your profits for the year. Since they don’t raise their own livestock, they need to get manure from somewhere else. So they buy it and truck it in.

In short, this is not the ideal of Old McDonald’s farm.

But they’re not alone. Organic farms across the country face the same challenges they face, and precious few find a way to stay in business while farming in a way that’s best for the earth.

And yet, the farmers I met are doing the best they can. Their values are in the right place, even if they end up compromised in practice.

If you saw their produce in the stores, you’d see it marked as “local” and “organic,” both of which are accurate. And it’s not overly expensive, either.

This is the heart of the difficulty we face in our food system in the U.S. Our food is cheap, compared to the rest of the world. We like it cheap. We need it cheap.

But because it’s cheap, our farmers simply can’t afford to do some of the things we’d like them to do -- such as pay farm labor higher wages, or use more sustainable methods.

And yet, if food were more expensive, the rich might complain, but the poor would go hungry. Even now, most healthier, organic, and fresh foods aren’t affordable for low-income people.

In an ideal word, farmers would be able to practice agroecology, which Berkeley professor Miguel Altieri describes as using a deep understanding of ecology to produce food. In other words, if we can learn to mimic mother nature and let her do the heavy lifting, we wouldn’t need to use gas-guzzling machines to try to bend nature to our will.

So while organic farming that cuts out chemicals from fertilizer and pesticides is better for the planet than conventional farming, it’s not as sustainable as it could be.

But because our economic system squeezes farmers, even the most environmentally conscious among them end up having to compromise their values to stay in business, limiting healthy food to only those who can pay for it.

OtherWords columnist Jill Richardson is the author of "Recipe for America: Why Our Food System Is Broken and What We Can Do to Fix It<". Distributed by OtherWords.org.