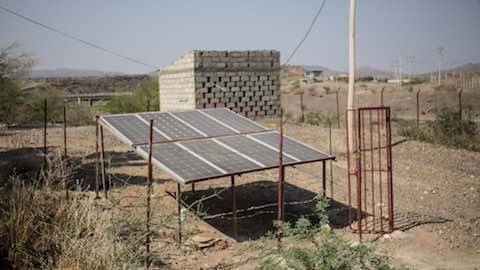 Emerging economies are increasingly taking the lead in shifting the world onto a cleaner development path, a senior World Bank official said on Wednesday, pointing to the role of China and India in pushing down the cost of producing solar power.

In India, for example, recent auctions to construct and run solar plants have seen prices for solar energy drop as low as for coal-fired power, tilting the economics of the electricity market towards renewables.

John Roome, senior director for climate change at the World Bank, said India had evolved from a decade ago when it was seen as part of the problem, insisting on its people's right to develop above all else. In the last two years it has become a leader on clean energy and climate action, he said.

"They see the co-benefits between dealing with congestion, air pollution and other development needs, and they see the falling costs of the technology, and they see the opportunity for getting ahead of the curve to create new jobs in developing an electric vehicle industry, an air-conditioner industry, a battery industry," he told the Thomson Reuters Foundation on the sidelines of a conference in Barcelona.

But India and other big developing countries cannot make the transition alone, he added.

For example, February's Indian solar power auction in Madhya Pradesh - where the cost of solar fell to a level equal with fossil fuels for the first time - was aided by World Bank help to acquire the land for a solar plant to be constructed.

Major improvements in energy efficiency, alongside new technologies, can enable poorer countries to grow in a green way, Roome noted, "but it's going to take very concerted work between the policies, the incentives, the financing (and) focusing on developing the markets".

He and other experts at the Innovate4Climate conference pointed to trillions of dollars now sitting in low-yielding investments or cash, looking for higher returns - much of which could be channeled into making economies greener and more resilient.

Currently less than 1 percent of global investment is certified as "green", Roome noted.

But moving capital into those new markets depends on finding the right levers, and achieving a balance between risks and expected profit, he noted.

"You need to attract capital by giving stability and returns," he said.

No to Old Tech

Gemedo Dalle, minister with Ethiopia's Ministry of Environment, Forests and Climate Change, said his country has done its best to put in place a stable investment environment, including laws and policies.

Ethiopia estimates it will need more than $150 billion to implement its national climate action plan by 2030.

As an industrializing nation, with the aim of becoming middle-income and carbon neutral by 2025, it has already built some modern infrastructure such as a light rail system in its capital - and the private sector is showing rising interest, Dalle said.

But the Horn of Africa country is not seeking to partner with companies offering old technologies, he emphasized.

"We are not looking for any kind of investment - we are looking for a climate-resilient, green economy," he told the conference.

Roome said development banks could assist in working out what policy measures are needed to reduce the risks of investing in climate change measures in developing nations, and then structuring deals to support that - whether it's a guarantee that power will be purchased as agreed or that communities will be resettled if displaced by a clean energy project.

Government and philanthropic funding should be used in a way that encourages private finance to enter the market, he said.

"We need to be much more rigorous about assessing the transformational value of any dollar that we spend," he added.

Hamid Tawfiki, the CEO of Moroccan investment bank CDG Capital, said it is also important to get investors interested closer to home.

"If you want to set up sustainable finance mechanisms... you have to develop local and regional capital markets", which will attract local savings, he said.

The World Bank's Roome noted that the quality of the national climate action plans, known as NDCs, submitted for the Paris climate agreement varies hugely.

But most progress is being made where efforts to put them into action is driven by heads of state, backed by ministries of finance and planning, he said.

"Anyone can write anything into an NDC. The question is, 'How do you translate that into policy and finance?'," he asked.

He urged countries that are integrating climate change considerations into their budgets, such as the Philippines, to help others learn from their experiences.

"If we can share these between countries, hopefully we can accelerate the process," he told the conference.