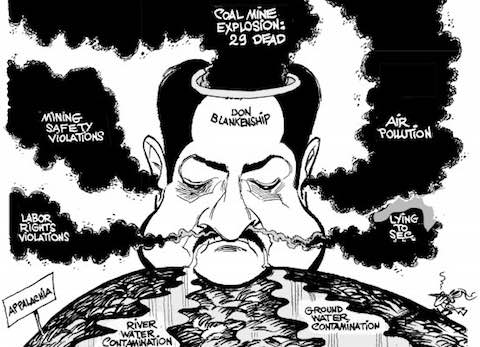 Villains like former coal CEO Don Blankenship make it easier to get riled up over climate change.

The Vermont senator is alarmed by reports that the energy giant spread doubt about climate change despite knowing since 1977 that global warming was both underway and fueled by its own operations. Bankrolling a disinformation campaign helped stymie climate action and "may have caused public harm," Sanders said in a letter to Attorney General Loretta Lynch.

A tobacco-style case against the whole oil and gas industry on racketeering charges may sound unlikely, but prospects are growing. And all heavily compensated executives who run fossil-fuel companies should heed the federal trial of a de-throned coal king in Charleston, West Virginia.

Prosecutors accuse Don Blankenship of conspiring to violate health and safety laws and to cover up that wrongdoing. The former Massey Energy CEO was also indicted for lying to shareholders and financial regulators about his company's safety practices after an explosion killed 29 men at its Upper Big Branch coal mine in 2010.

Investigators have tied the defendant's reckless management style to the mine's galling conditions.

While Blankenship's personal legal woes technically have nothing to do with the fact that coal pollution is a big source of climate-disrupting emissions, the former executive calls global warming as a hoax. He supports climate-denial groups and attends their conferences.

The fallen coal baron refuses to apologize for the miners' deaths or admit that he did anything wrong despite a damning parade of witnesses.

Blankenship also exposed himself as a heartless boss with his Nixonian penchant for recording his own conversations. And he abused his low-paid housekeeper so badly that he lost a West Virginia Supreme Court case over a labor dispute with her. Bill Taylor, the former CEO's lead defense lawyer, admitted to jurors that his client is "rude and insulting."

In short, Blankenship is a superb villain.

Perhaps this bad guy will ultimately help the common good. Global warming is hard to explain, hindering a widespread sense of urgency and outrage. If more fossil fiends get the attention and infamy they deserve, it could make their industries appear as evil as they actually are.

Should he be found guilty, the 65-year-old West Virginian could die in prison while serving up to three decades behind bars.

In the middle of Blankenship's trial, two dozen states teamed up with coal company Murray Energy to sue the government over the Clean Power Plan. That’s the Obama administration's requirement that states cut their carbon pollution by about a third within 15 years -- inevitably speeding up the ongoing wave of coal-fired power plant closures.

There's more at stake in that legal skirmish than with one disgraced mogul's fate. But convicting Blankenship could send a powerful message about accountability to all energy bigwigs, including those guys running ExxonMobil: Don’t jeopardize the health and safety of your workers or the general public, unless you’re willing to wind up behind bars.