The Reality of Climate Change in 5 Charts 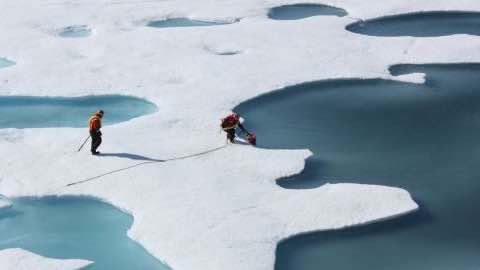 The Reality of Climate Change in 5 Charts

WeatherDB breaks down climate change into 5 charts and analyzes how the major contributing factors interact.

The year 2015 received the ominous warmest year on record title, and 2016 is likely to be even hotter. It's becoming clear that these warmer weather trends are not arbitrary, but confirmation that climate change is upon us.

As global temperatures rise, climate change is becoming a reality -- rather than a problem looming on the horizon. WeatherDB, a weather data site by Graphiq, breaks down climate change into five charts illustrating three of the major players in the complicated climate change web: temperature, carbon dioxide and water. Whether or not you believe that climate change is caused by humans, the numbers tell a convincing story of a planet rapidly changing, and heating up.

Of course, the climate change narrative begins with temperature. Since NOAA began recording data in 1880, the Earth's temperature has continuously risen. As the visualization above illustrates, every year since 1977 has been warmer than the 20th century average. Perhaps what is most alarming is that temperatures are steadily increasing by greater margins each year. 2016 is on course to be the first year ever in which the temperature anomaly surpasses 1 degree Celsius. If the trend continues in 2016, the Earth's temperature will be 1.08 degrees Celsius (1.9°F) hotter than the 20th century average.

Almost 2 degrees? That's barely noticeable at all, some may think. Can these small numbers really make a global impact? Science answers with a definitive yes.

If the yearly temperature anomaly surpasses 2 degrees Celsius (about 3.6 degrees Fahrenheit), scientists fear that the planet will be threatened by flooding, massive habitat loss and extreme drought. The article "2 Degrees Will Change the World" published by the Huffington Post in December 2015 vividly describes the problems the planet could face should Earth's temperature continue to rise.

What is causing this spike in temperature? Carbon dioxide, a naturally occurring greenhouse gas which is also emitted by the combustion of fossil fuels, is the suspected culprit.

On one hand, carbon dioxide is essential to our planet. Without this simple pairing of carbon and oxygen, the planet would be at least 33 degrees Celsius (60 degrees Fahrenheit) cooler than it is today. Carbon dioxide keeps the planet at comfortable temperatures by trapping radiated heat from the Earth's surface and re-radiating it back toward the surface.

However, it takes more and more energy to fuel the lives of the 7 billion people on this planet. We are emitting CO2 into the atmosphere whether we are eating, driving, working -- or even standing still. CO2 levels in our atmosphere have steadily been on the rise since recording began in 1958, but scientists can go much further back in time by looking at the carbon dioxide concentration in Antarctic ice. The last 100 years have seen an unprecedented spike in CO2 levels, particularly since automobiles have become a staple in the developed world.

Carbon dioxide levels took center stage in Al Gore's 2006 documentary "An Inconvenient Truth," in which he notes, "there is one relationship that is far more powerful than all the others, and that is this: when there is more carbon dioxide, the temperature gets warmer because it traps more heat from the sun ... Ultimately, this is really not a political issue so much as a moral issue. If we allow [CO2 levels to increase without regulation] it is deeply unethical."

There is another compound seriously affected by climate change -- H2O. Water covers 70 percent of the Earth's surface and while droughts could restrict our supply of fresh water, melting ice is causing sea levels to rise.

In 2002, NASA began using satellite images to research Greenland's ice sheet, and in those past 14 years, 3,540 gigatonnes of the ice sheet has melted (the equivalent of nearly 10.7 million Empire State Buildings). Antarctica is losing an average of 118 gigatonnes of ice per year, while the Arctic ice sheet is shrinking by 13.4 percent annually. According to NASA, "the planet has been shedding sea ice at an average annual rate of 13,500 square miles (35,000 square kilometers) since 1979, the equivalent of losing an area of sea ice larger than the state of Maryland every year."

Of course, all this ice needs somewhere to go. It is melting -- sometimes in massive sheets -- into the ocean. Rising ocean levels could force the 1 billion people living in coastal areas from their homes and cities to be seriously damaged. Large cities including Miami, Los Angeles and New York could be underwater within the next century if sea levels continue to rise, according to Climate Central. If all the ice in both ice caps melted, projections show that most of Florida, London and Denmark would be totally immersed in water.

The data paints an eerie picture. It will be up to humans -- the most crucial character in the climate change narrative -- whether or not we want to reduce our carbon footprint or continue to turn the heat up on our ailing planet.

Environment: "The Reality of Climate Change in 5 Charts"