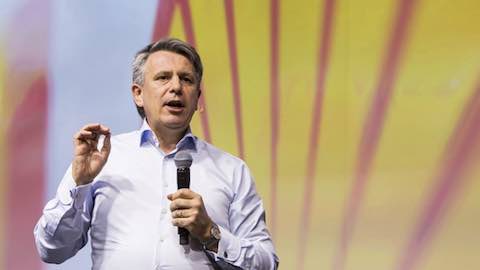 The industry is scaling back to keep investors happy.

Ensuring that our planet remains hospitable requires leaving about three-quarters of all oil, gas, and coal deposits underground or beneath the sea floor. And forgoing all those fossil fuels to avert a climate catastrophe means that loads of companies need to change the way they do business -- or go out of business.

So it's a relief to see Big Oil begin to scale back. But BP, Shell, ExxonMobil, and their competitors aren't doing that because they're worried about the climate. They're just scrambling to keep the industry's relatively high dividends flowing in this era of cheap oil.

"By the end of the year there will be about 4,000 fewer BP employees than at the start," BP chief executive Bob Dudley said when he announced the company's lousy performance between June and September. In addition to firing workers, the London-based company has slashed spending on new exploration and drilling to adjust to what this CEO calls a "new price environment."

BP's third-quarter profits were 40 percent lower than during the same period a year earlier. Yet the oil giant has actually bumped up the dividend it pays investors over the past 12 months.

"We spend time with our shareholders," Dudley said. "We are committed to maintaining the dividend at BP."

In case you've lost track, here's why gasoline is averaging about $2.25 a gallon: The price for a barrel of crude topped $100 in mid-2014 before tumbling because of a wave of over-production that hasn't abated. Oil experts see prices ranging between $40 and $60 a barrel as the new -- and way less profitable -- normal.

Goldman Sachs analysts, for example, predict that prices could lumber along like this for 15 years, and may sink as low as $20 per barrel. This kind of prognosis is making the industry sound tight-fisted.

"We have to live within our means," Shell CEO Ben van Beurden told investors while discussing the company's $6.1 billion third-quarter loss, which was magnified by Shell's decision to hold off on drilling for Arctic oil and mining the Carmon Creek tar sands in Alberta, Canada.

Meanwhile, the Dutch oil giant is "pulling out all the stops" to prop up its dividend, van Beurden said. And U.S.-based oil companies are equally determined to continue paying investors to hang onto their stock.

Chevron recently announced that it will scrap up to 7,000 jobs after the corporation's third-quarter profits plunged 63.6 percent. Its dividend remains intact after increasing for 28 straight years.

ConocoPhillips, which lost $1.1 billion during the third quarter, intends to abstain from new offshore drilling projects and will sell leases it won't use. The company has no plan to cut its dividend.

ExxonMobil CEO Rex Tillerson promised a "relentless focus" on cost-cutting when he announced that third-quarter earnings amounted to about half of what they were in 2014. The nation's biggest oil outfit is boosting its dividend, as it's done for 33 years in a row.

But just like it's hard to make every mortgage payment when you wind up unemployed for a long stretch, unprofitable companies eventually pare dividends or stop paying them. That's why Marathon, one of the 10 biggest U.S. oil companies, recently slashed its dividend by 79 percent to a nickel per share.

Anyone who sees Big Oil's stocks as a perpetual source of investment income should take note.

And until paring dividends becomes more commonplace, the industry will inadvertently keep doing its share to leave more oil in the ground.