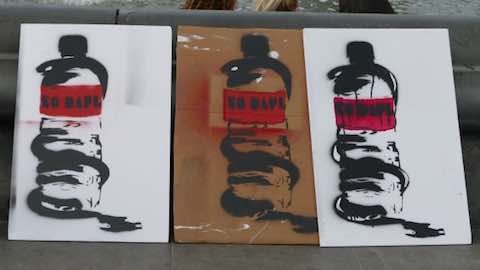 Thousands of Native Americans at Standing Rock in North Dakota are protesting a pipeline project that puts their water supply at risk, threatens to plow up their sacred sites, and would worsen climate change.

Their rallying echoes hundreds of local struggles across the U.S. that question the prudence, safety, and necessity of thousands of new gas pipeline projects.

The gas industry tells us these projects promote energy independence and meet local gas needs. But the driving force behind most of these billion dollar infrastructure projects? Gas export.

Big gas is desperate to get their cheap shale gas to global export terminals -- and they’ve dug up millions of backyards to do it. Fortunately for the industry, they have a subservient federal agency that grants them the power of eminent domain to take those backyards.

The anti-pipeline movement brings together mayors, state officials, and engaged neighbors concerned about health and safety, unnecessary rate increases, and the environmental irresponsibility of constructing new fossil fuel infrastructure. They’re fed up with a system that allows the profits of private energy corporations to override local concerns and dictate our future.

Many politicians remain stuck in the “gas as a bridge fuel” perspective. But growing scientific evidence shows that methane from gas extraction and transportation poses a greater short-term climate change risk than burning carbon fuels like coal and oil.

We should be rapidly shifting away from all new fossil fuel infrastructure projects, and investing in fixing existing gas leaks and using renewable energy like wind, hydro, and solar. This shift will create millions of high-paying jobs in the new energy economy.

The anti-pipeline movement is gathering steam. Residents have mobilized to stop pipeline projects in Massachusetts and New Hampshire, and have stalled others in Kentucky.

But not all anti-pipeline efforts have been successful.

In the Boston neighborhood of West Roxbury, residents have vigorously opposed a high-pressure pipeline that arcs into the heart of a densely populated neighborhood and terminates across from an active blasting quarry. All of Boston's elected officials unanimously oppose this project -- but big business is still winning.

The Texas-based Spectra Energy sued the city and took their streets by eminent domain. The city of Boston is still trying to block the project in court, but construction is almost complete. In the last year, almost 200 neighbors and religious leaders have been arrested for blocking construction.

How is this possible in a democratic society?

The answer lies with a little-known and unaccountable agency called the Federal Energy Regulatory Commission (FERC). Under the Gas Act of 1938, FERC may grant private corporations the power of eminent domain over local jurisdictions.

Maybe this was necessary in 1938 to build a modern energy system. But today, we need an energy agency that’ll balance a wider set of considerations, not just the interests of a politically powerful gas industry.

In the last few years, FERC has rubber-stamped just about every project the natural gas industry has sought to build. These include high-pressure pipelines running next to nuclear power plants, across fragile water supplies, and across traditional Native American lands.

In the words of Robert F. Kennedy Jr., FERC is a “rogue agency.” The U.S. Senate should convene oversight hearings to examine FERC overreach. Congress must modernize the Gas Act to protect communities and reduce carbon and methane emissions. And an independent agency should assess our nation's real energy needs.

Decisions about our energy future shouldn’t revolve around a self-interested gas industry and investor-owned utilities. For the sake of the planet and our democracy, other voices must be at the table.

Chuck Collins is a senior scholar at the Institute for Policy Studies where he co-edits Inequality.org. He is author of Born on Third Base: A One Percenter Makes the Case for Tackling Inequality, Bringing Wealth Home and Committing to the Common Good. Distributed by OtherWords.org