A Commencement Address for the Most Indebted Class Ever 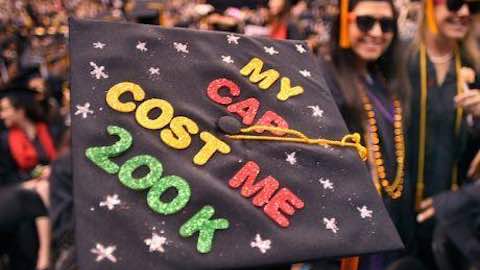 A Commencement Address for the Most Indebted Class Ever
(Photo: elibrody/Flickr)

Congratulations, college graduates! The system is trying to squeeze you harder than any generation before you.

Congratulations, college graduates! As you enter the next phase of life, you and your parents should be proud of your achievements.

But, I’m sorry to say, they’ve come at a price: The system is trying to squeeze you harder than any previous generation.

Many baby boomers, perhaps including your parents, benefited from a time when higher education was seen as a shared social responsibility. Between 1945 and 1975, tens of millions of them graduated from college with little or no debt.

But now, tens of millions of you are graduating with astounding levels of debt.

This year, seven in 10 graduating seniors borrowed for their educations.

Their average debt is now over $37,000 -- the highest figure for any class ever.

Already, some 43 percent of borrowers -- together owing $200 billion -- have either stopped making payments or are behind on their student loans. Millions are in default.

This debt casts a long shadow on the finances of graduates. During the last quarter of 2015 alone, the Education Department moved to garnish $176 million in wages.

One driver of the change from your parents’ generation has been tax cuts for the wealthy, which have led to cuts in higher education budgets. Forty-seven states now spend less per student on higher education than they did before the 2008 economic recession.

In effect, we’re shifting tax obligations away from multi-millionaires and onto states and middle-income taxpayers. And that’s led colleges to rely on higher tuition costs and fees.

In 2005, for instance, Congress stopped sharing revenue from the estate tax -- a levy on inherited wealth exclusively paid by multi-million dollar estates -- with the states. Most state legislatures failed to replace it at the state level, costing them billions in revenue over the last decade.

In fact, the 32 states that let their estate taxes expire are foregoing between $3 to $6 billion a year, the Center on Budget and Policy Priorities estimates. The resulting tax benefits have gone entirely to multi-millionaires and billionaires -- and contributed to tuition increases.

For example, California used to raise almost $1 billion a year in revenue from its state-level estate tax. Now that figure is down to zero. And since 2008, average tuition has increased over $3,500 at four-year public colleges and universities in the state.

But it doesn’t have to be this way. Washington State went the opposite route.

Washington taxes wealthy estates and dedicates the $150 million it raises each year to an education legacy trust account, which supports K-12 education and the state's community college system. Other states should follow this model, and students and parents should take the lead in demanding it.

If millions of young people stood up and said they’re “sick and tired of leaving college $30,000, $50,000, $70,000 in debt, that they want public colleges and universities tuition-free,” he predicted, “that is exactly what would happen.”

Sanders is right: Imagine a political movement made up of the 40 million households that currently hold $1.2 trillion in debt.

If we stood up and pressed for policies to eliminate millionaire tax breaks and dedicate the revenue to debt-free education, it would change the face of America.

Graduates, let’s get to work.

Chuck Collins directs the Program on Inequality and the Common Good at the Institute for Policy Studies.
Distributed by OtherWords.org.

Education - A Commencement Address for the Most Indebted Class Ever