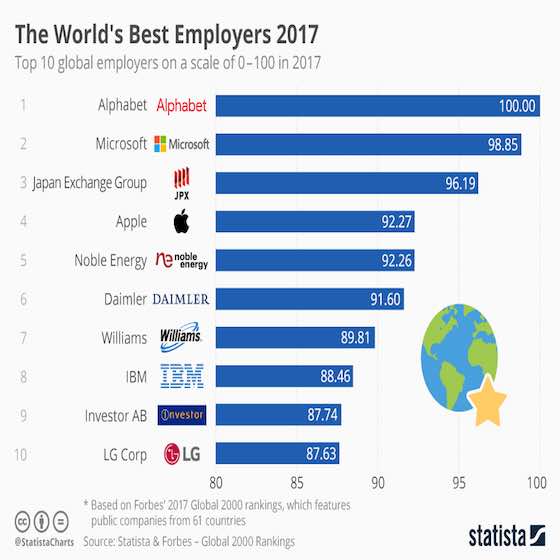 Forbes and Statista teamed up to produce this chart of the top 10 global employers on a scale of 0-100 in 2017. This year, Google parent company Alphabet was named the World's Best Employer.

The Forbes Global 2000 List is a well-known annual must-read in business. This year for the first time Forbes teamed up with Statista to take the project one step further, identifying the 500 World's Best Employers and the 250 Top Regarded Companies around the globe.

Statista analyzed more than 360,000 recommendations for a company as an employer, using both macro global polling methods and regionally-based surveying. In order to evaluate companies as a top employer, employees were asked to rate their own employer internally as well as to say how likely they would be to recommend other employers in industries they are familiar with.

This year, Google parent company Alphabet was named the World's Best Employer 2017, with its employees giving their thumbs up to the company's image and working conditions. Microsoft and Japan Exchange Group came second and third respectively, both proving hugely attractive for employees. To browse the full rankings and read more about the methodology, please visit Forbes.

The World's Best Employers According to Forbes - Jobs & Career Advice