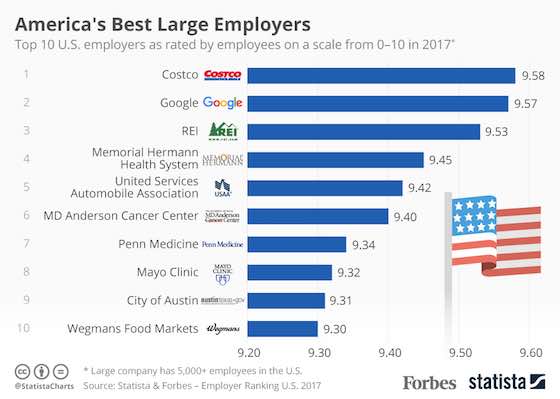 Which U.S. companies and organizations offer their employees the very best deal? Statista, in partnership with Forbes, decided to find out. 30,000 workers

30,000 workers at U.S. companies, nonprofit institutions, government agencies, and U.S. divisions of multinationals were asked to evaluate their employers in terms of atmosphere, remuneration, working conditions and other factors. The following question was also central to the survey: how likely would the respondents be to recommend their employer to a friend or family member on a scale of 0-10?

Costco spent the last two years in the top 5 but this year, the company grabbed top spot with a score of 9.58 out of 10. Costco is the second largest retailer worldwide after Walmart and it has a 143,000 strong workforce in the U.S.. One of its more notable perks is insurance coverage for its part-time workers. Google is famous for its perks and benefits and the search engine giant comes a close second in this year's ranking. The top three was rounded off by outdoor retailer REI who appeared in the ranking for the very first time with a score of 9.53. You can browse the full ranking on Forbes.com here.