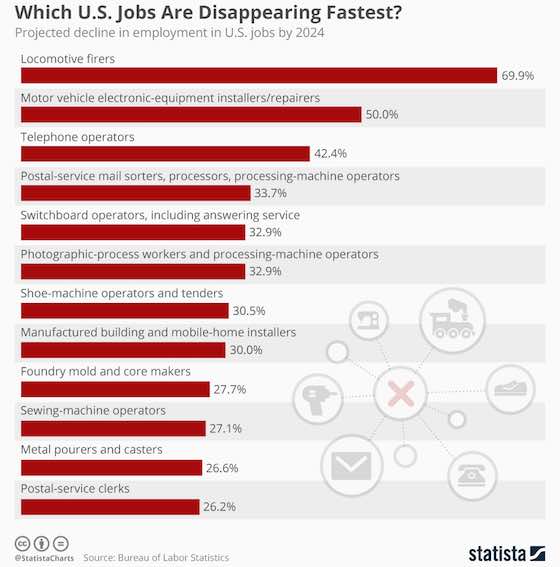 Which American jobs are disappearing the fastest? This chart shows the projected decline in employment in U.S. jobs by 2024

A long list of U.S. jobs are being rendered obsolete by technological advancements and automation. Which workers are most at risk?

According to the Bureau of Labor Statistics, locomotive firer is the job set to shrink the most over the coming decade. A locomotive firer is responsible for monitoring instruments on trains as well as watching for signals and dragging equipment. The workforce is small, numbering 1,700 in 2014. By 2024, however, that is going to decrease even further to just 500, a decline of 70 percent.

Motor vehicle electionic equipment installers and repairers are also set to see their ranks decimated by 2024. 11,500 of them were employed in the U.S. in 2014 and a decade later, that is expected to fall sharply to 5,800. Telephone operators are the third most endangered profession in America with their numbers expected to drop 42.4 percent by 2024.