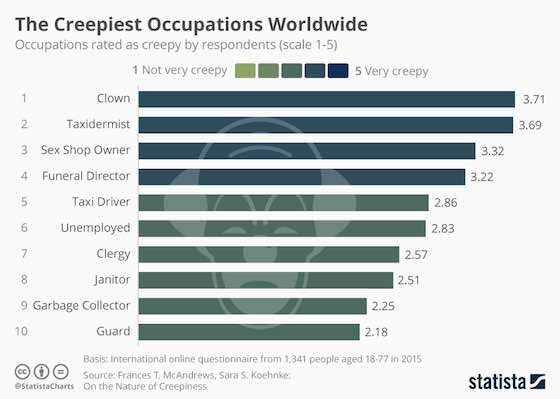 This chart shows occupations rated as creepy by respondents on a scale of 1 to 5.

Which professions tend to attract the creepiest individuals?

The vast majority of people have at least one creepy colleague and some cringeworthy stories to boot. It could be that guy with the goatee who always hangs out by the copy machine striking up awkward conversations or the girl who constantly stares but doesn't say much.

However, according to scientific research about the nature of creepiness, it's far more likely that you'll get creeped out by your taxi driver on the way home from a night out.

Appearing in the journal "New Ideas in Psychology", the research suggests that males are more likely to be perceived as creepy than females with some occupations more strongly linked to creepiness than others. Perhaps unsurprisingly given the recent "creepy clown" phenomenon, clown is perceived as the creepiest occupation of all. It's followed closely by taxidermist with sex shop owner coming in third.