Physical Demands Of The Workplace 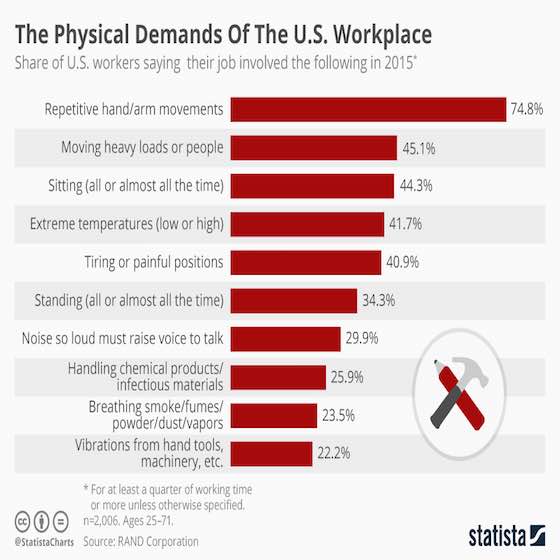 Physical Demands Of The Workplace

A new report from the RAND Corporation has analyzed the physical and emotional toll of the modern U.S. working environment. The research found that considerable numbers of employees find their jobs emotionally taxing while many others have to deal with an intense level of physical exertion.

The following infographic provides an overview of the level of physical activity many employees have to endure.

Just under 75 percent said they have to put up with repetitive hand and arm movements while at least 45 percent have to move heavy loads a quarter of their working time or more. 44 percent said they sit all or most of the time while 34 percent are on their feet all day. Exposure also poses a problem for many workers, whether it's doing a job outdoors in freezing temperatures or dealing with hazardous substances.

The Physical Demands Of The Workplace - Jobs & Career Advice