The 10 Most Common Bad Boss Traits 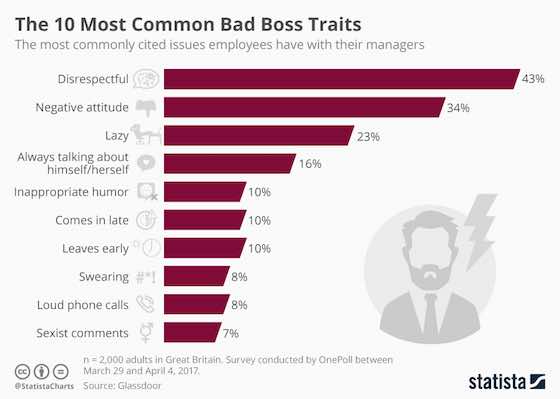 The 10 Most Common Bad Boss Traits

Is your boss a good boos or a bad boss? Here's the most commonly cited issues employees have with their managers.

The majority of employees have had the displeasure of working under someone they dislike.

You could say it goes with the territory of being in charge, but some bosses seem to have a special knack for annoying their subordinates.

As a recent survey by Glassdoor shows, the negative trait most commonly cited by workers is a manager that is disrespectful. A negative attitude is said to bring down 34 percent of respondents, while a lazy boss rounds off the top three biggest gripes with 23 percent.

The chart above shows the most commonly cited issues employees have with their managers.