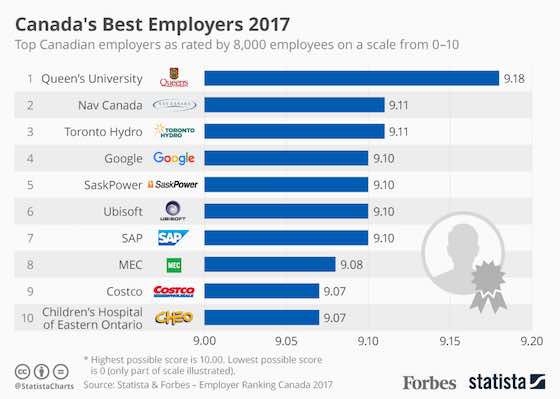 Which Canadian companies and organizations offer their employees the very best deal? Statista, in partnership with Forbes, decided to find out.

Forbes and Statista decided to find out by conducting a survey across 25 industries. This involved asking 8,000 Canadian employees at 300 large companies (with over 500 employees), nonprofit institutions government departments & agencies, and local multinational divisions two key questions. Firstly, would they recommend their employer to a friend or family member? And secondly, would they recommend another employer within their industry?

This year, Queen's University in Kingston, Ontario, was named Canada's Best Employer in 2017. Topping the ranking with a score of 9.18 points out of 10, the public research university has almost 24,000 students and 7,000 faculty and staff members. It offers its employees competitive salaries as well as generous benefits and pension coverage. According to its website, the university is committed to employment equity and diversity, promoting job opportunities for women, visible minorities, aboriginal people, persons with disabilities, and persons of any sexual orientation or gender identity.

Nav Canada and Toronto Hydro are tied for second place in the survey, both scoring 9.11 points out of 10. The former owns and operates Canada's civil air navigation system while the latter is the nation's largest municipal electricity distribution company. The survey also revealed the passion and high regard ordinary Canadians have for their domestic companies. This year's top three employers are all Canadian, outranking foreign companies such as Google, the search engine giant which has always proven immensely popular with its employees. You can find the full ranking of Canada's 300 best employers here.

The chart above shows top Canadian employers as rated by 8,000 employees on a scale from 0 to 10.