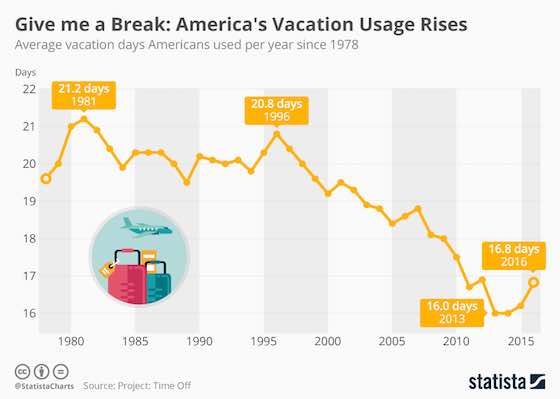 After two decades of almost steady decline the average number of vacation days has risen.

The United States, unlike many other industrialized countries, has no statuary agreement on taking paid vacation. Meaning: There is no law telling employers the minimum number of days they need to give their employees off work - that are also paid for.

However, Project:Time Off, which is sponsored by the U.S. Travel Association, has good news: After two decades of almost steady decline the average days of vacation have risen by 0.6 days year-over-year to 16.8 days in 2016.

"Despite this encouraging sign, taking time off continues to be a challenge in America's always-on work culture," the authors of the latest report conclude. Still, in 2016, 662 million vacation days were left unused, four million days more than 2015.

Taking time off doesn't just profit the individual workers who is said to become more productive after being able to recharge their batteries. According to the project's estimates, "the jump in vacation usage from 16.2 to 16.8 days delivered a $37 billion impact to the U.S. economy."