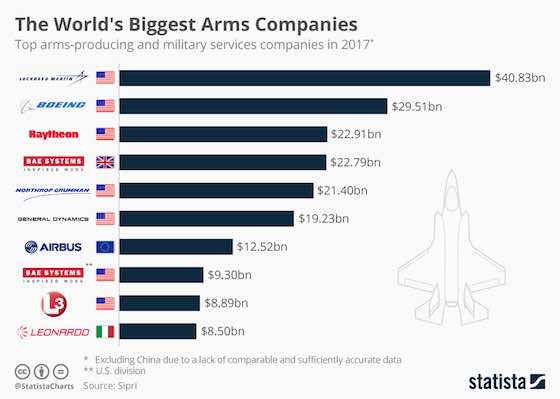 This chart shows the top arms-producing and military companies.

Last year, the sale of arms and military services around the world was 1.9 percent higher than in 2015, the first year of growth after five consecutive years of decline. Sipri found that weapons sales totalled $374.8 billion in 2016, with American companies accounting for $217.2 billion of that total.

U.S. companies were driven by large export orders and major acquisitions. Lockheed Martin retained its place at the top of the biggest arms-producing companies with $40.8 billion in sales. Its purchase of helicopter manufacturer Sikorsky and accelerated deliveries of the F-35 Lightning II combat aircraft contributed to its success. Boeing's arms sales came to $29.5 billion last year and its more notable deals included the sale of P-8A Poseidon maritime patrol aircraft and AH-64E Apache attack helicopters to the UK.

Out of the ten largest arms manufacturers, seven are American and BAE systems is the first-non U.S. company on the list. Known for producing the Royal Navy's new aircraft carriers as well as the Eurofighter Typhoon combat aircraft, it came fourth on the list in 2016 with sales coming to $22.9 billion. It is also on course for a successful 2017, having recently announced the sale of 24 Typhoons to Qatar in a deal worth up to £6 billion.