What Apple's Offshore Cash Can Buy 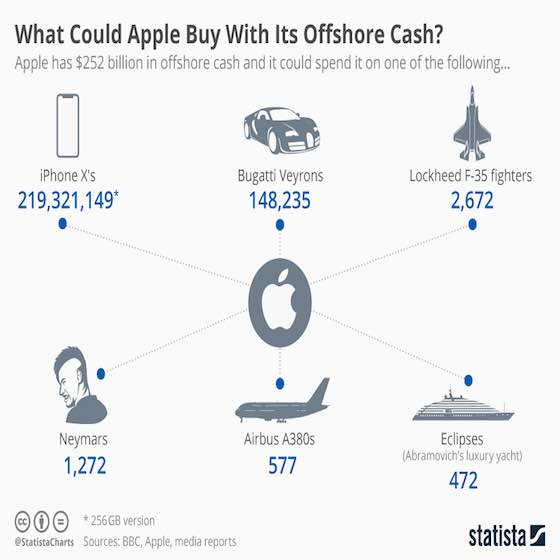 What Apple's Offshore Cash Can Buy

This chart shows what Apple could buy with its $252 Billion in offshore cash.

The Paradise Papers have revealed that Apple has a secretive new structure that has enabled it to avoid a 2013 clampdown on its tax practices in Ireland. After widespread criticism of its tax affairs, Apple moved the firm holding the majority of its untaxed offshore cash to Jersey in the Channel Islands, allowing it to keep an ultra-low tax rate. Apple has defended its move, saying that its new structure has not lowered its taxes and that it remains the world's largest taxpayer, paying approximately $35 billion of corporate taxes over the past three years.

That's a lot of dough. So much in fact that it's hard to imagine what Apple could actually buy with it. The following infographic attempts to put the sum into perspective by showing a selection of different things the company could possibly purchase with all ifs offshore cash. $252 billion would be enough to buy Neymar 1,272 times or 577 Airbus A380s.