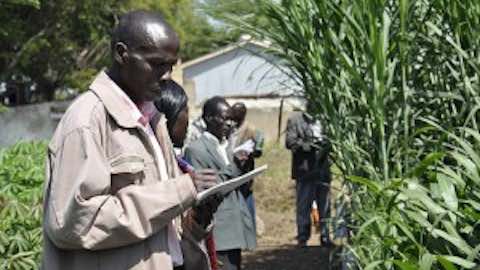 With more of us crowding a warming planet, we need agricultural change.

An alien visiting from another planet during that critical transition period to a more settled existence might have thought that we were being domesticated by our livestock and not the other way around.

Sure, hunting and gathering was hard, what with hunger and saber-toothed tigers breathing down our necks. And agriculture allowed for the development of everything we associate with modernity: politics, economics, MTV.

But now that there are more than 7 billion of us on this planet, going up to nearly 10 billion by the middle of this century, we can’t resume a truly Paleo lifestyle. There’s not much big game around anymore, after all. We’re stuck with farming.

And agriculture is helping to push up global temperatures. Up to one-third of all the carbon emissions responsible for climate change come from farming, thanks to everything from fertilizer production to flying raspberries halfway around the world.

Throw in livestock, and things look even worse: a whopping 18 percent of greenhouse gasses, according to one Food and Agriculture Organization (FAO) report, come from the mass production of cows, pigs, and chickens (and World Watch argues that the FAO undercounted by a factor of three).

Would a “lentil dictatorship” work? By forcing people to shift to a mostly legume diet, we would reduce the enormous drain of resources caused by eating meat -- up to 16 pounds of grain goes into one pound of steak -- and naturally replenish the soil by planting these nitrogen-fixing plants.

Given the difficulties that former New York mayor Michael Bloomberg faced when he tried to wean people off sodas larger than 16 ounces, I think this would be a recipe for failure.

The United Nations has come up with a good idea. Its Global Alliance for Climate-Smart Agriculture uses the latest technology to maximize yields and minimize the impact on the land.

For instance, farmers can use lasers to create level fields to reduce water use and consult precise weather forecasts to know when to sow and irrigate. This technology has already improved farming in the richer countries.

These are useful techniques. Yet they mostly help farmers adjust to rising temperatures and dwindling water resources rather than reverse the negative feedback loop pushing up the thermometer.

Organic farming advocates argue that a shift way from energy-intensive industrial agriculture will do the trick. But this transformation may not suffice. It’s not clear that purely organic farming could produce enough to feed the planet without cultivating what little land remains in the wild.

And where organic farmers have been able to scale up, they have begun to resemble the very industrial producers they aimed to replace.

Another way to go is low-tech. Instead of plowing up the land in order to plant the next crop, many farmers don’t overturn the soil of the entire field. They simply dig narrow trenches. This “no-till” agriculture produces comparable yields without the considerable erosion caused by conventional farming. Yet no-till agriculture can use more herbicides to get rid of all the weeds that aren’t plowed under.

Every technique poses risks. The danger of industrial farming is precisely its reliance on monocultures: field after field of a single variety of grain that runs the risk of being wiped out by a new kind of blight.

The solution? Diversity. “No single crop or approach to farming can possibly feed the world,” writes Michael Specter in The New Yorker. “To prevent billions of people from living in hunger, we will need to use every one of them.”