The State of Venture Capital Spending 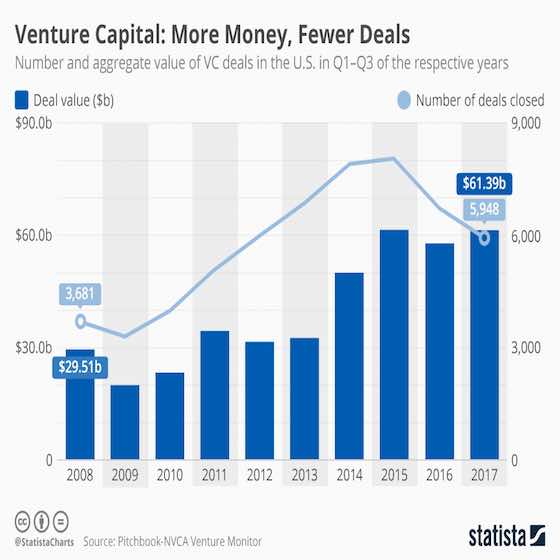 The State of Venture Capital Spending

Venture capital spending in the United States is on track to be the highest since the turn of the millennium this year, despite an ongoing decline in the number of deals.

In the first three quarters of 2017, venture capital firms invested a total of $61.4 billion in 5,948 completed deals. According to data from Pitchbook-NVCA Venture Monitor, the number of deals through the first nine months of this year was the lowest since 2011, when 5,104 VC deals were closed between January and September.

Meanwhile the average deal size increased to a decade high of $10.3 million this year, as startup companies tend to stay private longer and draw massive late-stage funding rounds. The median deal size for later stage VC rounds was $11 million in the first three quarters of 2017, compared to $1 million for angel/seed investments and $6 million for early stage VC deals.

Despite the increase in so-called megadeals such as the $4.4 billion investment that office rental startup WeWork secured from SoftBank earlier this year, the total investment volume is still way off its late 90s/early 2000s peak. In 2000, at the height of the tech bubble, VC investment in the U.S. amounted to more than $180 billion which is more than twice the total that VC firms will likely end up spending this year.