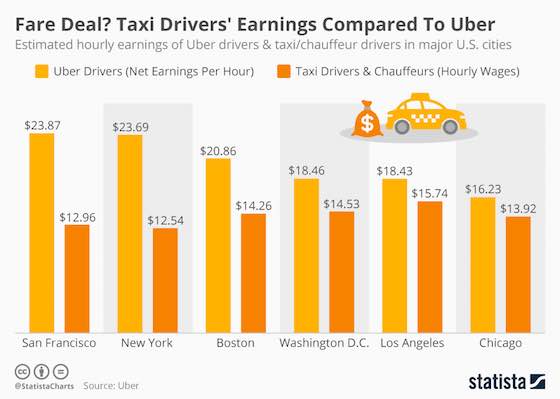 How the estimated hourly earnings of Uber drivers compare to taxi drivers and chauffeurs in major U.S. cities.

The number of Uber drivers across the United States has exploded in recent years, with people signing up in droves due to the flexibility and simplicity offered by the service. In major U.S. cities, Uber drivers are outearning their counterparts driving taxis by considerable margins, according to a report released by the National Bureau of Economic Research.

How do Uber drivers' earnings compare to taxi drivers in major U.S. cities?

There are considerable differences in earnings by city with San Francisco proving the most lucrative city for Uber drivers. Estimated net earnings per hour in San Francisco come to $23.87, compared to just $12.96 for taxi drivers and chauffeurs. New York is another city where Uber drivers can earn good money, with net hourly earnings amounting to $23.69. Again, they outearn taxi and chauffeur drivers who make just $12.54 every hour.

The report makes the point that Uber drivers tend to earn more in cities where taxi and chaffeur drivers also tend to earn more. However, it is important to note that expenses incurred by Uber drivers such as gasoline and insurance cover are not reimbursed and are not included in the figures above. An Uber driver working full time with a medium sedan can expect to incur an hourly expense of $4.79 while employed taxi drivers generally have their costs covered by their company.