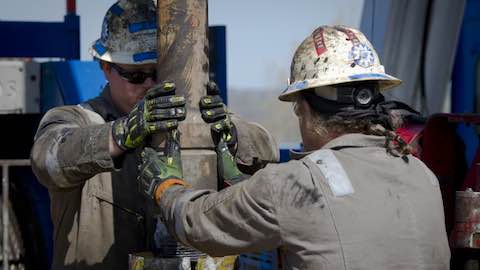 We break down how fracking contributed to the global oil downturn, in three charts. Here's how it all started and why the industry has struggled to turn around.

Earlier this year, oil prices fell to roughly 15-year lows, a global downturn for one of the world's most lucrative industries. Oil's decline has had global ramifications, impacting not only the United States, but major exporters like Saudi Arabia, Russia and Venezuela. So what happened?

For a clue, it helps to look at Saudi Arabia. Petroleum products account for 90 percent of the country's export market, forcing its economy to fluctuate at the whim of oil prices. With a GDP of more than $650 billion -- making it one of the world's largest economies -- Saudi Arabia has been punished by low oil prices.

In 2008 and 2011, with oil prices at $100 a barrel, Saudi Arabia's economy was growing by more than 8 percent each year. With oil prices tumbling to less than $45 a barrel, that growth rate is now expected to slow to just 2.5 percent in 2016. To control mounting budget deficits, government officials are being forced to cut spending, adopt new taxes and reduce price subsidies for fuel, water and power.

But what was the root cause of the drop in oil?

It turns out that Saudi Arabia, in addition to many other major exporters, were humbled by a simple drilling method invented in 1947 called hydraulic fracturing. You may know it as fracking.

The drop in oil prices was chiefly a supply issue. As shale oil extraction exploded following the mass adoption of fracking, the United States nearly doubled its domestic oil production from 2007 to 2015. As domestic production of oil rose, the United States no longer needed to rely on foreign imports. These imports fell more than 50 percent from their high of 12 million barrels a day in 2005.

Lower U.S. imports forced major global producers (such as Saudi Arabia) to drop prices. Still, major projects across the world -- which were initiated when oil was above $100 a barrel -- started to come online, pushing production higher despite falling prices.

Collectively, the group controls 80 percent of the world's oil reserves, giving it the ability to control oil prices by manipulating supply. "Through 90 percent of oil history, if oil producers wanted to outproduce demand they could have. And it would always have buried oil prices," writes Jeremey Grantham, co-founder of $120 billion asset manager Grantham, Mayo, Van Otterloo. "But mostly they restrained their competitive market share instincts in the interest of a more stable price."

While OPEC has historically cut supply to balance markets and keep the price of oil high, it decided to keep pumping this time around, keeping its supply at record highs. A flood of supply coming from both North American fracking and record-high OPEC production helped oil prices plummet more than 50 percent from late 2014 to early 2016.

When Will Prices Rebound?

Saudi Arabia has some tough choices to make. After fracking helped push oil to under $50 a barrel, it simply can't afford its massive government budget. While it's starting to make small cuts, the country will need higher oil prices in the future to avoid feeling too much pain.

If oversupply caused the oil collapse, supply cuts will be needed to rebalance the market. Fortunately for Saudi Arabia, most North American companies are struggling to stay profitable with depressed oil prices. With few projects worth developing, U.S. companies have dramatically cut their rig counts (the structures that drill for oil) to their lowest levels in over 30 years.

Supply cuts will take some time to implement, but by 2018, the U.S. Energy Information Agency expects the gap between supply and demand to close. The last time the market was completely balanced, oil was at $100 a barrel. Saudi Arabia will likely be fine once the market stabilizes, but its leaders probably never expected that fracking, a technology invented in Kansas back in 1947, could cause so much trouble.