Netflix added more subscribers than ever in the fourth quarter of 2018. The company surpassed its growth targets by adding 11.4 million subscribers between October and December, bringing its subscriber total to 148.5 million, including those on a free trial.

As the following chart illustrates, Netflix's growth has increasingly shifted to international markets in recent years as the streaming giant expanded to more and more markets. In the most recent quarter, Netflix added 9.3 million subscribers internationally and just 2.1 million on its home turf. International customers now account for 60 percent of the company's subscriber base, up from just 40 percent three years ago.

Wall Street closely watches Netflix's subscriber growth because the company's ongoing investment in content, both licensed and self-produced, will only pay off in the long run if its global subscriber base continues to grow. 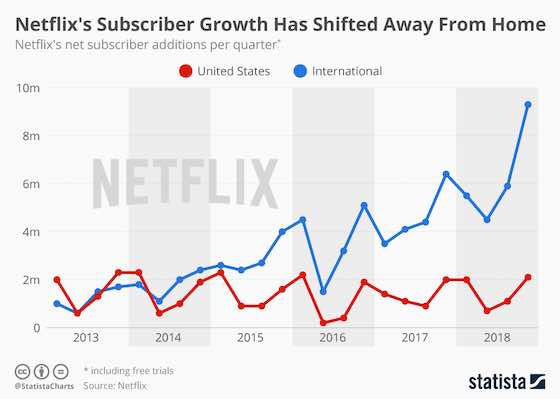 In a move that disgruntled some customers but delighted many shareholders, Netflix raised the prices for its U.S. streaming subscribers this week. For the first time in its history, the company raised the prices for all three streaming plans, including the highest ever increase for the most popular standard plan, allowing HD streaming on up to two devices simultaneously.

Having last increased its prices in the fall of 2017, Netflix felt it was due another price hike to “continue investing in great entertainment and improving the overall Netflix experience”. In order to defend its position as the world's most popular streaming platform, the company has been investing heavily in original and licensed content. In the first nine months of 2018 alone, Netflix spent $8.5 billion in cash on streaming content, an investment that will pay off in the long run as long as the company continues to grow its international subscriber base.

As the following chart shows, this week's change marks the fourth price hike to Netflix's standard plan in nine years. And despite it being the largest one (+18%), the subscription price still looks like a bargain compared to the average price of a premium cable subscription, which sits around $100. 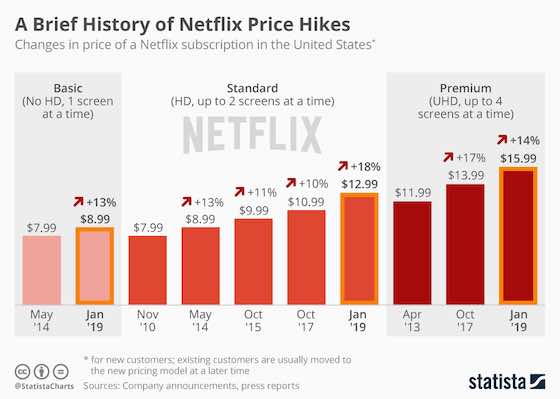