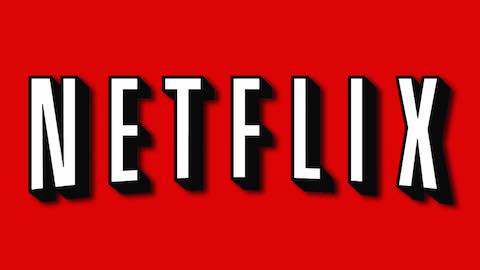 While subscribers may not be happy to see their monthly bill increase, Netflix's shareholders certainly seem to back the company's strategy.

Netflix's share price reached an all-time high recently after the company decided to raise prices for (some of) its subscribers in the United States. The latest price hike, the third since the company started offering a standalone streaming option in 2011, will affect the standard tier ($10.99 instead of $9.99) as well as the premium tier plan ($13.99 instead of $11.99) while the entry-level plan will remain unchanged at $7.99.

While subscribers may not be happy to see their monthly bill increase, Netflix's shareholders certainly seem to back the company's decision. After all, higher prices equal higher revenue, assuming that the number of cancellations won't be too high. In the past, the company's subscriber growth may have slowed down following price increases but it never turned negative. Over the past six years, the company's contribution profit from domestic streaming, i.e. revenues minus costs that are directly related to the segment, increased nearly five-fold, while the contribution margin improved from 23 percent in 2012 to 36 percent in 2016. 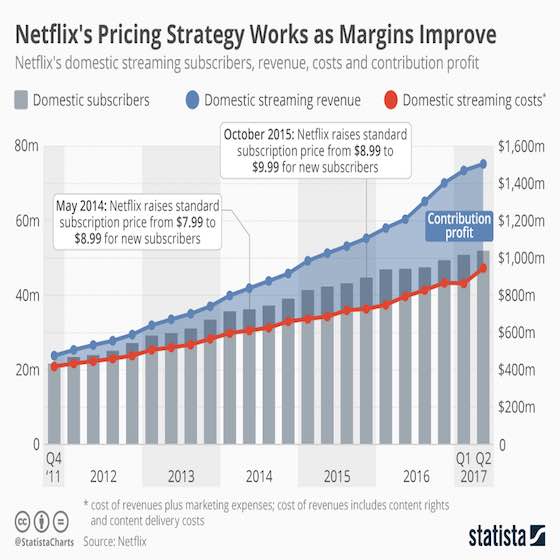 Who's Watching Flix on the Net?

Three predominantly English speaking countries make it in to the top five ranking of countries that have the biggest share of Netflix users. According to figures provided by data platform Alexa, Netflix's home country, the United States, provides the biggest share of visitors to Netflix.com. This doesn't necessarily mean that all those visitors actually also log in to use Netflix, but it is a clear indicator from where most users come. Also, the data provided does not include users who watch Netflix via the app.

This chart shows top five countries worldwide with the highest share of visitors on Netflix.com 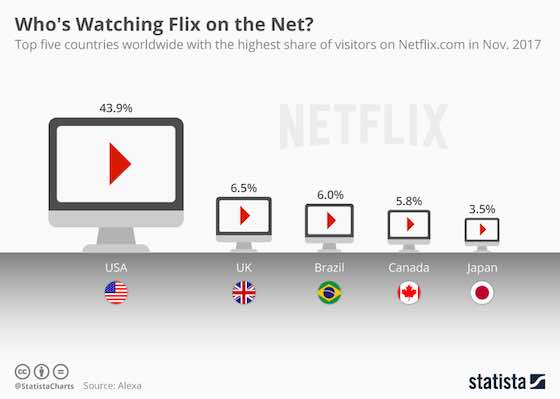 Who's Watching Flix on the Net?