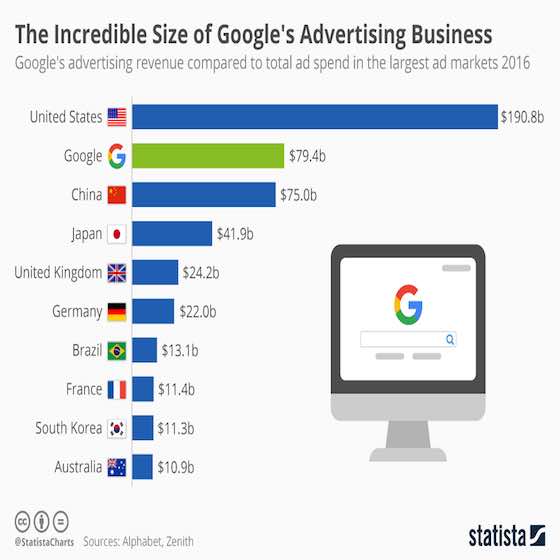 This chart shows Google's advertisting revenue compared to total ad spend in the largest ad markets around the world.

Google's parent company Alphabet reported, beating analyst expectations across the board. Revenue was up 21 percent to $26.01 billion, thanks to an increase in advertising revenues as well as other revenues, which include Google's hardware and cloud businesses. The company's net income declined from $4.88 billion to $3.52 billion due to a $2.7 billion antitrust fine imposed by the European Commission and accrued this quarter.

Despite the many activities that Alphabet is engaged in, the lion's share of the company's revenue still stems from the core Google segment and its advertising business in particular. Ad revenue amounted to $22.67 billion in the three months ending June 30, accounting for 87 percent of the company's total revenue. Google's advertising business is safely on track to surpass $90 billion this year, making it the largest ad-selling company in the world by far.

As our chart illustrates, Google's ad revenue amounted to $79.4 billion last year, surpassing total advertising expenditure in all countries except for the United States. In 2016, Google raked in 44 percent of global online ad revenues and 15 percent of the worldwide total across all mediums.