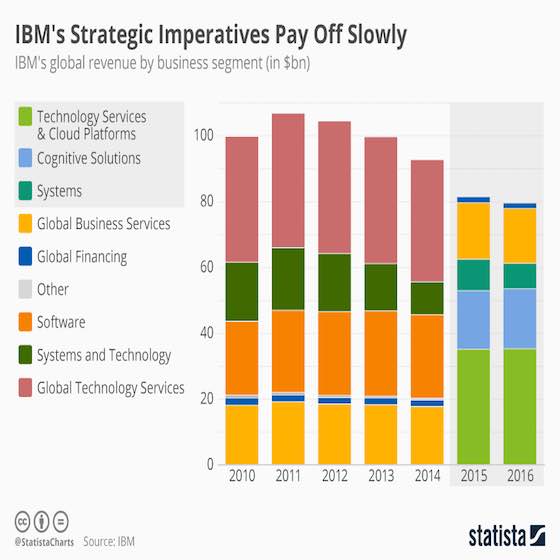 Although listed as one of the most valuable technology brands in the world, IBM has been struggling to reach positive revenue growth rates in recent years. This chart shows IBM's global revenues from 2010 to 2016 sorted by business segment.

In the previous quarter, IBM had disclosed revenues below the expected estimates by analysts, reaching $19.29 billion instead of $19.46 billion. Whether the third-quarter in 2017 will become the 22nd quarter in a row with negative numbers remains to be seen. The revenue for the past three months is expected to be around USD 18.6 billion and the per-share profit at $3.28.

The details as to why IBM continues to miss their revenue target seem unclear.

Yet, it appears that IBM has difficulties to sustain their recent shift from a traditional hardware and software company to a provider of cloud computing, security software, data analytics and artificial intelligence. Despite significant positive growth in the strategic imperatives segment, particularly cloud computing, IBM's financial standing remains shaky as other tech companies seem to outrun IBM's strongest suits.