How Holiday Shoppers Decide Where to Buy 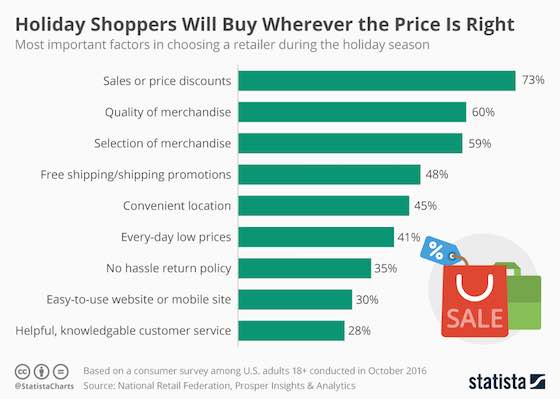 How Holiday Shoppers Decide Where to Buy

Most current research suggests that consumers will split their holiday spending evenly between the digital and the real world. Here's how do they decide where to buy what.

These days, shopping splurges and Thanksgiving feasts go hand in hand for the vast majority of Americans.

As soon as they finish digesting their Thanksgiving feasts, many Americans will head out for a mammoth shopping splurge. According to the National Retail Federation, an estimated 137.4 million people are planning or considering shopping during this year's Thanksgiving weekend. The splurge reaches its zenith on Black Friday, the busiest shopping day of the year, when Americans spend billions getting a head start on their holiday shopping.

Interestingly, however, the majority of holiday shopping still happens in December. A Deloitte survey recently revealed that only nine percent of Americans plan to do the majority of their holiday shopping on Black Friday with 40 percent preferring to purchase the bulk of their gifts in December. Three percent of people prefer to take advantage of the post-Christmas sales and do the bulk of their shopping in the post-Christmas sales in January.

Business: "How Holiday Shoppers Decide Where to Buy"