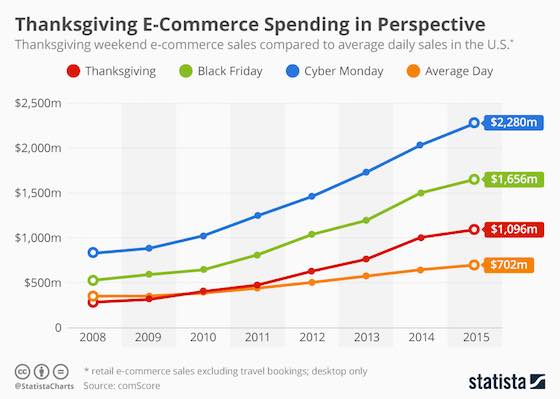 Online e-commerce keeps getting bigger and bigger for U.S. shoppers and retailers alike. Here's a look at the growth of e-commerce since 2008

The Thanksgiving weekend keeps getting bigger and bigger for U.S. shoppers and retailers alike.

According to comScore, Cyber Monday saw about $355 million in e-commerce sales in 2008. Since then, the online shopping splurge has skyrocketed with sales from desktop users hitting $2.28 billion last year.

Black Friday and Thanksgiving itself have also experienced impressive growth in e-commerce sales since 2008, reaching $1.66 and $1.1 billion in 2015 respectively. While this is considerably less than what consumers spend online on Cyber Monday, it still outstrips e-commerce sales on an average day by a healthy margin.

The chart above shows Thanksgiving weekend e-commerce sales compared to average daily sales in the U.S.