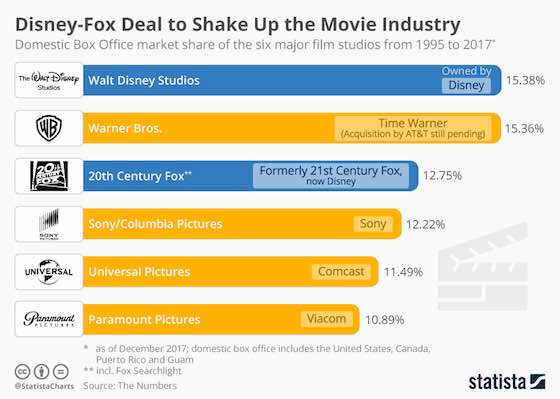 This chart shows the domestic box office market share of the six largest film studios since 1995.

Disney's acquisition of 21st Century Fox's film and TV assets will dramatically change the balance of power in the movie industry.

For decades Hollywood has been ruled by six major film studios, including Disney and 20th Century Fox. The deal, that was officially announced recently but has yet to be approved by shareholders and regulatory authorities, will create one giant studio with an impressive list of movie franchises in its portfolio (Star Wars, Pixar, Marvel's Cinematic Universe etc.). Already notorious for driving hard bargains, Disney's negotiating power vis-à-vis movie theater owners will be further strengthened by adding guaranteed blockbusters such as X-Men and Avatar to its name.

As our chart illustrates, the newly formed studio will stand head and shoulders above the remaining four of the former ‘Big 6'. With a combined domestic box office market share of 28 percent since 1995, Disney including 20th Century Fox will be nearly twice as large as its strongest competitor Warner Bros.