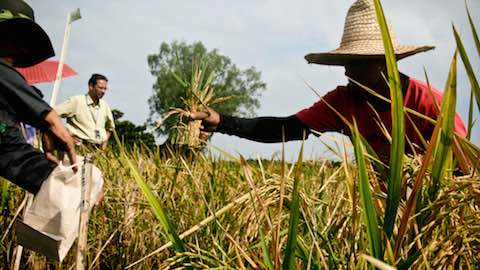 Scientists in the Philippines are at work on a strain of rice that could solve one of the world's major health challenges: a vitamin A deficiency. The so-called, 'golden rice', which has been genetically engineered to produce beta carotene, has led to opposition

Scientists in the Philippines are at work on a strain of rice that could solve one of the world’s major health challenges: a vitamin A deficiency.  The so-called, “golden rice”, which has been genetically engineered to produce beta carotene, has led to opposition from GMO opponents, including Greenpeace.

To supporters of golden rice, the crop offers enormous potential for eliminating as many as two million deaths each year from vitamin A deficiency, which mainly impacts young children and pregnant women.

The beta carotene in the new rice is a precursor for Vitamin A, which is missing in the diets of millions of people in the developing world. The deficiency is a leading cause of childhood blindness, and is a public health problem in many countries.

Canadian ecologist Patrick Moore says there should be no debate over whether farmers should grow golden rice.

“Why is there not the same revulsion at two million children dying," Moore asked. "To let golden rice out so at least some people can get it and maybe more and more and more?”

But critics, including the Greenpeace environmental group, have long opposed the crop because of the genetic engineering involved in its creation. Moore was an early member of Greenpeace in the 1970s and early 80s, but has since become a critic of the group’s stance on a range of issues, including golden rice.

Unlike some genetically modified crops designed by corporations that patent the plants, the golden rice being developed in the Philippines is financed by public funds. A range of philanthropic and public sector groups have worked to engineer the crop and improve its production. They hope that farmers in the developing world will eventually grow it, addressing a major public health issue that many scientists say is on the scale of malaria or tuberculosis.

But Manila-based Greenpeace Southeast Asia Agriculture Campaigner Daniel Ocampo said after 20 years of research golden rice is not ready for consumption, and could be more dangerous than its supporters will admit.

“It’s still in the laboratory. It’s not available commercially," Ocampo said. "So it’s really misleading the public when they say that it’s going to be one of the solutions to Vitamin A deficiency.”

Greenpeace is instead pushing what it calls “ecological agriculture” which it said is climate resilient and will let people access food that meets their nutritional needs.

A year and a half ago, a group of anti-GMO activists overran one of the golden rice test plots in the Philippines' Bicol region and destroyed it in a protest against the project. The incident raised the profile of the conflict over golden rice, and led some to accuse Greenpeace of being behind the protest and the destruction. But the organization says it had nothing to do with it.

The International Rice Research Institute just south of Manila has been doing breeding experiments with golden rice for nine years, but said they must still conduct more research before it is ready for human consumption.