Companies With The Most Tax Havens 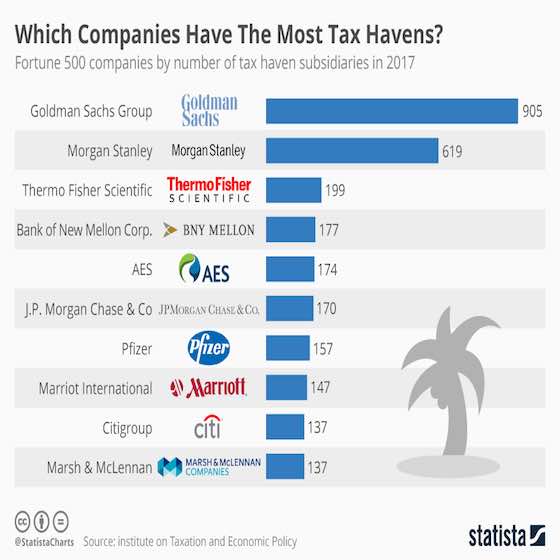 Companies With The Most Tax Havens

Multinational companies based in the United States are able to avoid paying an estimated $100 billion in federal income tax every year through the use of tax havens.

A recent report from the Institute on Taxation and Economic Policy has found that 366 of America's largest 500 companies maintain 9,755 tax haven subsidiaries holding over $2.6 trillion in accumulated profits. Despite only having three tax haven subsidiaries in Ireland, Apple stashes the most cash off shore by far, some $246 billion which helps the company avoid $76.7 billion in U.S. taxes.

The Goldman Sachs Group maintains the most tax havens of any large U.S. company by far with 905 in total. That includes 511 in the 511 in the Cayman Islands (though the company does not have an office there), 183 in Luxembourg, 52 in Ireland and 41 in Mauritius.

Morgan Stanley is in second place with 619 tax haven subsidiaries while ThermoFisher Scientific rounds off the top three with 199. Even though small island nations like Bermuda and the Cayman Islands are notorious for tax avoidance schemes, the Netherlands is actually the country most frequently used as a tax haven by American companies.

Business: "Companies With The Most Tax Havens"