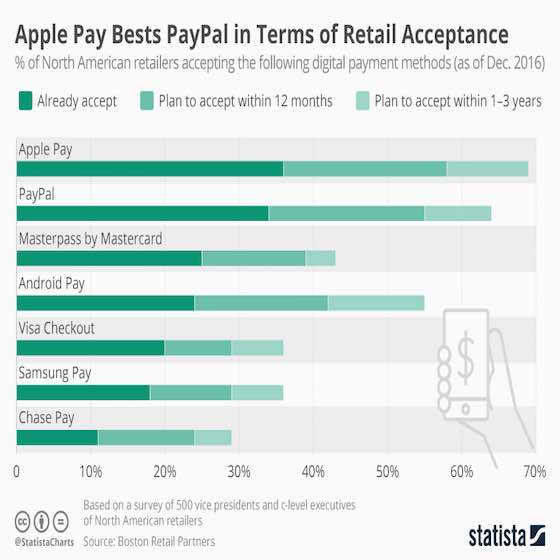 This chart shows ther percentage of retailers in North America that accept alternative payment methods such as Apple Pay.

While many countries are still waiting for Apple Pay to arrive on their shores, the payment service that was launched in October 2014 is apparently doing well where it's available. Earlier this year, Apple CFO Luca Maestri said that Apple Pay accounts for 90 percent of NFC payment transactions worldwide and the company's VP of Apple Pay, Jennifer Bailey, called the service “the future of everyday spend” at the Money 20/20 conference this weekend.

Bailey also announced that Apple Pay is going to launch in Denmark, Finland, Sweden and the United Arab Emirates in the next few days, bringing the total number of countries where it's available to 20. In North America, Apple Pay is already the most popular alternative payment method in terms of retail acceptance. According to research from Boston Retail Partners, the service was accepted by 36 percent of North American retailers by December 2016, with another 22 percent saying they plan to accept it within the next 12 months.

Unfortunately, Apple doesn't disclose how much money it makes off Apple Pay, but it is safe to assume that the service is a major contributor to the recent growth of the company's Services segment.