Amazon vs the World 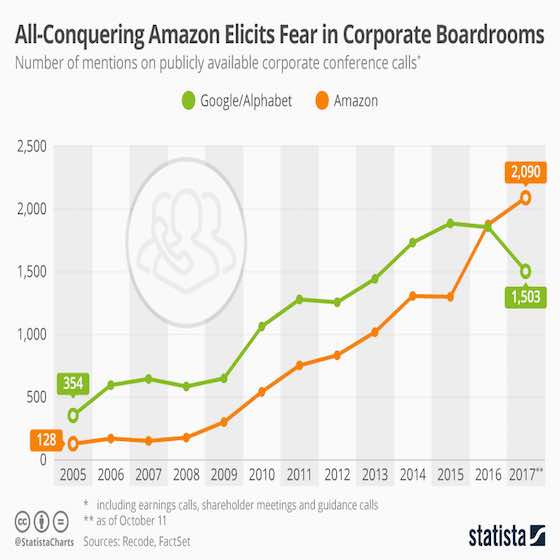 Amazon vs the World

All-Conquering Amazon elicits fear in corporate boardrooms. This chart shows how many times Amazon and Google are mentioned in other company's corporate conference calls.

First it was bookstores and other brick-and-mortar retailers, now it's grocery stores, electronics manufacturers, media companies and seemingly every other company you could think of: everybody fears Amazon.

With its relentless determination to reinvest any incoming money into new ventures, Amazon is conquering one industry after another. Needless to say that the Seattle-based company dominates online retail in many countries, but it is also a market leader in cloud infrastructure and smart speakers with aspirations in countless other areas.

For many years, Google used to be the company that everybody feared. The company's de-facto monopoly in the search market made the company a gatekeeper for any business trying to achieve something in the brave new digital world. According to FactSet data analyzed by Recode, Google has now passed the torch to Amazon. Based on the number of mentions in corporate conference calls, Amazon is now what Recode describes as “the new corporate bogeyman”, the company that elicits the most fear and admiration in other companies' boardrooms.

Business: "Amazon vs the World"