Alcohol & Sport: A Match Made In Heaven 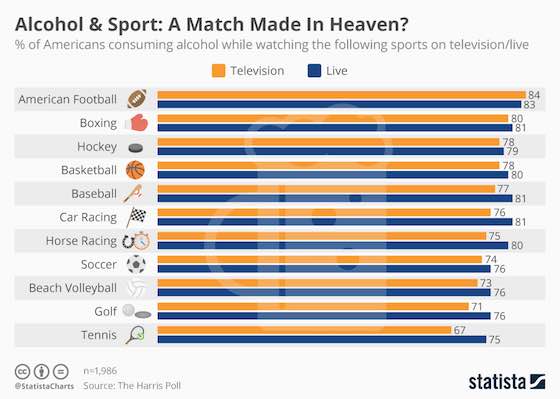 Alcohol & Sport: A Match Made In Heaven

The percentage of Americans consuming alcohol while watching sports on television or live.

If you're an American and you're watching sports, chances are you probably have a beer in your hand. A new survey from the Harris Poll suggests that alcohol and sport are indelibly intertwined.

People who watch sport live in the stadium or at home on television are highly likely to enjoy the action with some form of alcoholic beverage. Interestingly, some sports involve higher levels of consumption than others. People attending live sports are also highly likely to hit the bar, no matter what sporting event they attend.

Interestingly, some sports go hand-in-hand with alcohol more than others. American football is the premier U.S. sport for drinking with 84 percent consuming alcohol while watching it on television and 83 percent enjoying it at the stadium. Boxing is the second most popular sport for a round of drinks, whether you're watching at home or ringside. 78 percent of people tend to watch a hockey game on television with some form of alcoholic beverage and it rounds off the top three.

Even though it's less common to order a beer at a tennis game, many people do it anyway. 75 percent of U.S. adults say they prefer to drink alcohol during a live tennis game while 76 percent quench their thirst for beer watching a live round of golf.

Business: "Alcohol & Sport: A Match Made In Heaven"