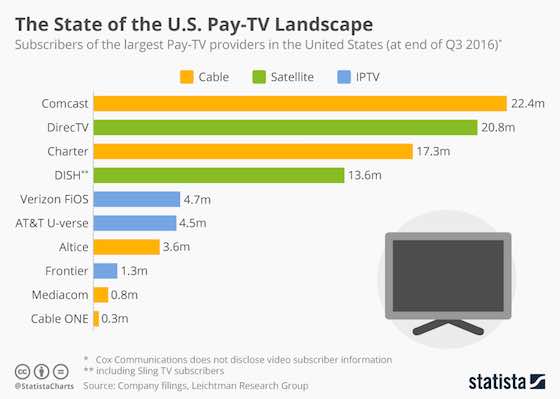 AT&T made a big leap into TV streaming, when it announced DirecTV Now. Here's the number of subscribers of the largest Pay Streaming-TV providers in the United States

AT&T made a big leap into TV streaming recently, when it announced DirecTV Now, a new service which will allow subscribers to stream up to 120+ TV channels to a wide range of devices.

As opposed to AT&T's previous IPTV offering U-verse, the new DirecTV Now service will not require a set-top box, enabling viewers to watch their favorite video content wherever they go as long as they have a good enough internet connection.

Speaking of internet connection, DirecTV Now is also a prime example of one of the key issues that have arisen with the ongoing consolidation of telecommunication companies and content providers. AT&T's broadband and mobile customers will enjoy the exclusive privilege of not having their DirecTV Now streaming traffic counted against their data caps. This is a very controversial practice though, which, some argue, hampers competition. After all, there's little reason for any of AT&T's 50 million wireless subscribers and 14 million broadband customers to choose a competing service over DirecTV Now when given the chance to stream unlimited video content without having to worry about data consumption.

The new service will further strengthen AT&T's grasp on the television market. Having acquired DirecTV and Time Warner (given the deal is approved by regulators), the company has a major stake in all three aspects of the business: content creation, content distribution and the infrastructure behind it.