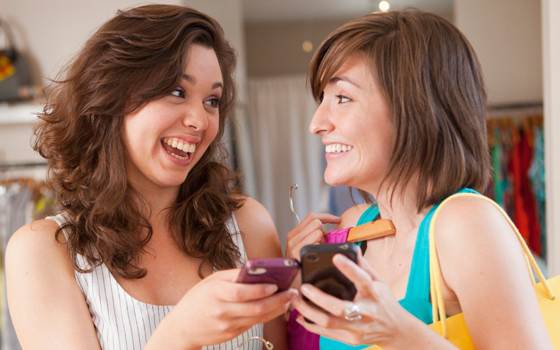 Fans of Steven Spielberg’s sci-fi thriller Minority Report may remember the stores that identified customers by their eyeball prints. After John Anderton (played by Tom Cruise), on the run from the law, gets a back-alley eye transplant, he knows he is safe when a retail outlet computer politely addresses him as “Mr. Yamamoto.”

Something of the sort is fast becoming reality as bellwether store chains like Macy’s and American Eagle Outfitters rush into the so-called age of connected retailing. And just like in the movies, this transformative technology is provoking a mixture of excitement over innovation, and customer paranoia.

The engine powering the approaching connected retail revolution is a technology known as Bluetooth low energy (BLE), or “Bluetooth Smart” in the vernacular. Where standard Bluetooth would connect a cell phone or tablet to a remote microphone without wires, Bluetooth Smart links your device to a nearby server, while also feeding that server your location with much higher precision than GPS. When you have your Wi-Fi on, conventional satellite positioning can usually tell you are in Macy’s Flagship location in Herald Square. Bluetooth Smart knows you are in the ladies’ shoe department at Macy’s next to the Uggs sale, and it can navigate you around the store’s interior -- a function GPS performs poorly.

With customer permission, the Bluetooth Smart connection can meld its locator to a personal profile and purchase history, and the connected retail experience is under way. The shopper connects to the retailer’s app, which can zap it with an instant $15 discount coupon for footwear, suggest varieties of matching socks two aisles over, and inform her that it just started raining out so she might want to pick up an umbrella one floor down. Depending on security arrangements, the customer may also be able to pay by scanning the item herself, avoiding the cashier’s line altogether.

Bluetooth Smart technology was invented by Nokia in 2006, but it took a leap forward last year when Apple introduced its iBeacon feature (compatible with most iPhone models), which uses minimal energy. Technology writers are in a lather about the potential of connected retailing. “iBeacon and BLE set the stage for futuristic shopping possibilities truly personal to you,” a recent article in PC Mag gushes. “Personalization options are limitless.”

Real live shoppers seem more skeptical however, fearing the possibility of Big Brother overreach behind the big savings. In a survey earlier this year by pollster OpinionLab, two-thirds of respondents said they would opt out of the connected retailing experience even at their favorite stores, and 44 percent said they would avoid a store that even offered a “tracking” option. Mega-retailer Nordstrom already paid a price for customer queasiness last year after informing shoppers it would track their movements if they logged their cell phones on to its in-store Wi-Fi network. Popular pushback forced the company to abandon the scheme.

Connected retail is steaming ahead nonetheless. ABI Research predicts that 25,000 venues worldwide will offer some variation of the Bluetooth Smart experience by the end of this year, and the associated software market will pass $4 billion during 2018. Competitor MarketsandMarkets projects a more moderate figure of $2.6 billion -- still an explosive increase from $450 million last year.

The challenge for stores is using connected retail to offer shoppers a helpful nudge, without giving them the feeling they are being spammed or stalked. Retailers might study the example of event managers such as those at the SXSW music festival in Texas, early adopters of BLE, to spread the word about shifting show times and to help customers find their way around, apparently without infringing on anyone’s sense of privacy. Coffee stores have started using the technology so that as soon as regular customers enter the store their usual order is instantly brewed before a word is spoken.

Smart could make a dramatic impact by easing the payments process, depending on new software entering the market from PayPal, Apple and other developers. That means storeowners can sell the service to customers as a convenience, and unobtrusively slip in connected retailing. If it works well, the public will likely get used to it fast.