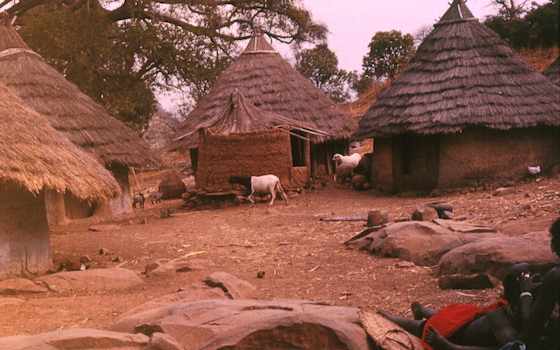 Reminiscent of Marjane Satrapi's Persepolis, this graphic novel brilliantly evokes the music, colour and economic optimism of late 1970s Abidjan -- then popularly known as 'the Paris of West Africa'.

The first in a series about the lives of the titular heroine and her hard-partying girlfriends, Aya speaks to universal themes of teenage dreams and the ambitions of the working class.

"That's what I wanted to show in Aya: an Africa without the . . . war and famine, an Africa that endures despite everything because, as we say back home, life goes on." -- Marguerite Abouet

Aya tells the story of its nineteen-year-old heroine, the studious and clear-sighted Aya, her easygoing friends Adjoua and Bintou, and their meddling relatives and neighbors. It's a breezy and wryly funny account of the desire for joy and freedom, and of the simple pleasures and private troubles of everyday life in Yop City.

An unpretentious and gently humorous story of an Africa we rarely see-spirited, hopeful, and resilient.

The Last Will and Testament of Senhor da Silva Araujo

A gently melancholic tone underscores this elegant, witty novel about the revelations contained in the will of a quietly successful businessman.

The intrigues of Senhor da Silva's life interweave with the dying days of Portugal's colonial rule, offering insight into how the transition to independence affected society.

With his will, Senor da Silva leaves a memoir that is a touching web of elaborate self-deceptions. He desired so ardently to prosper, to be taken seriously, to join (perhaps, if they'll have him) the exclusive Grémio country club, and, most of all, to be a good man. And yet, shady deals, twists of fate, an illegitimate child: such is the lot of poor, self-critical Senor da Silva.

A bit like Calvino's Mr. Palomar in his attention to protocol and in his terror of life's passions; a bit like Svevo's Zeno (a little pompous, a little old-fashioned, and often hapless), Senor da Silva moves along a deliciously blurry line between farce and tragedy: a self-important buffoon becomes a fully human, even tragic, figure in the arc of this hilarious and touching novel

My First Coup D'Etat: Memories from the Lost Decades of Africa

Published in the year that the author (pictured) became President of Ghana, this memoir details his coming-of-age in an era of political and economic instability in the first African country to free itself from colonial rule, and the influence of his father, a minister of state, on his own political understanding.

This autobiography will particularly appeal to readers who enjoyed Dreams from My Father: A Story of Race and Inheritance

This is a one-of-a-kind book: Mahama's is a rare literary voice from a political leader, and his stories work on many levels -- as fables, as history, as cultural and political analysis, and, of course, as the memoir of a young man who, unbeknownst to him or anyone else, would grow up to be vice president of his nation.

Though non-fiction, these are stories that rise above their specific settings and transport the reader -- much like the fiction of Isaac Bashevis Singer and Nadine Gordimer -- into a world all their own, one which straddles a time lost and explores the universal human emotions of love, fear, faith, despair, loss, longing, and hope despite all else

So Long a Letter

Written in the form of a letter from a newly widowed woman to her distant friend, this novel speaks devastatingly of the experiences of many women living in traditional societies in post-colonial Africa.

Mariama Ba's affecting evocation of grief, friendship and frustrated female ambition make it clear why this is considered a classic of West African literature.

Written by award-winning African novelist Mariama Ba and translated from the original French, So Long a Letter has been recognized as one of Africa's 100 Best Books of the 20th Century. The brief narrative, written as an extended letter, is a sequence of reminiscences—some wistful, some bitter—recounted by recently widowed Senegalese schoolteacher Ramatoulaye Fall. Addressed to a lifelong friend, Aissatou, it is a record of Ramatoulaye's emotional struggle for survival after her husband betrayed their marriage by taking a second wife. This semi-autobiographical account is a perceptive testimony to the plight of educated and articulate Muslim women. Angered by the traditions that allow polygyny, they inhabit a social milieu dominated by attitudes and values that deny them status equal to men. Ramatoulaye hopes for a world where the best of old customs and new freedom can be combined.

Considered a classic of contemporary African women's literature, So Long a Letter is a must-read for anyone interested in African literature and the passage from colonialism to modernism in a Muslim country.

Winner of the prestigious Noma Award for Publishing in Africa.

A remarkable story told in a straight-forward manner, Kpomassie sets out how a childhood accident in rural Togo led to his determined decade-long journey to visit a place he had only read about: Greenland.

With the eye of an amateur anthropologist, Kpomassie draws parallels between the Togolese society he was born into and the Inuit community into which he was adopted, sending a message about the universality of human nature.

Tete-Michel Kpomassie was a teenager in Togo when he discovered a book about Greenland -- and knew that he must go there. Working his way north over nearly a decade, Kpomassie finally arrived in the country of his dreams. This brilliantly observed and superbly entertaining record of his adventures among the Inuit is a testament both to the wonderful strangeness of the human species and to the surprising sympathies that bind us all.

Say You're One of Them

The settings of these short stories span the African continent, but the way in which young people deal with desperate situations is a uniting theme. Akpan's unflinching descriptions of violence and extreme poverty can make for challenging reading, but his vivid creation of character combined with a gift for pidgin-inflected dialogue makes this a promising debut.

Each story in this jubilantly acclaimed collection pays testament to the wisdom and resilience of children, even in the face of the most agonizing circumstances.

A family living in a makeshift shanty in urban Kenya scurries to find gifts of any kind for the impending Christmas holiday. A Rwandan girl relates her family's struggles to maintain a facade of normalcy amid unspeakable acts. A young brother and sister cope with their uncle's attempt to sell them into slavery. Aboard a bus filled with refugees -- a microcosm of today's Africa -- a Muslim boy summons his faith to bear a treacherous ride across Nigeria. Through the eyes of childhood friends the emotional toll of religious conflict in Ethiopia becomes viscerally clear.

Uwem Akpan's debut signals the arrival of a breathtakingly talented writer who gives a matter-of-fact reality to the most extreme circumstances in stories that are nothing short of transcendent.