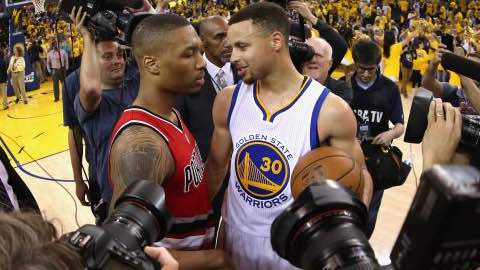 The Portland Trail Blazers were dispatched from the playoffs by the Golden State Warriors, but they still shattered everyone's expectations in 2015-16. PointAfter looked back at how they beat basement-level projections to remain a competitive entity in the West.

The Portland Trail Blazers fell to the reigning champion Golden State Warriors in five games during the Western Conference Semifinals, but if you recall preseason predictions, they had no business being there in the first place.

After four of Portland's five starters from the 2014-15 season departed via free agency or trade, expectations for the Trail Blazers plummeted. Without LaMarcus Aldridge, Wesley Matthews,Nic Batum and Robin Lopez, how would general manager Neil Olshey and head coach Terry Stotts pick up the pieces and remain competitive? Pundits were far from convinced this team could weather the storm.

Four CBS Sports writers combined to predict an average of less than 25 wins for Portland -- one even predicted a league-worst 18 wins on the horizon for Stotts' new-look crew. ESPN Forecast projected the Trail Blazers would finish with a 31-51 record (a direct flip from the year prior), and the No. 11 seed in the West. Even my PointAfter colleague Will Laws -- who aimed to cut through the noise by projecting league standings strictly by player win shares -- had Portland finishing in the lottery (though with a more accurate 39-win outlook).

Fast-forward to April, and Portland shattered just about every prediction and proved all the doubters wrong. The Blazers went 44-38, finishing with the No. 5 seed in the West.

Using PointAfter visualizations, we'll take a look back at how Portland silenced the critics.

There simply isn't an argument to be made that any backcourt other than Stephen Curry and Klay Thompson is the best in basketball. That being said, Portland's high-scoring duo of guards is in the conversation for second place.

Behind the Splash Brothers' 52.2 combined points per game was Portland's Damian Lillard and C.J. McCollum at 45.9 per contest. That narrowly edged out the scoring output of Kyle Lowry and DeMar DeRozan for the Toronto Raptors (44.7 points per contest).

The 2016 Most Improved Player, who held his own alongside Lillard, was integral in alleviating the stresses of losing four starters from a season ago.

McCollum's minutes more than doubled this year as he was thrust into the starting shooting guard role. As a result, his scoring skyrocketed from 6.8 points per game all the way up to 20.8 -- putting him No. 18 in the entire league.

That scoring volume was accompanied by tremendous efficiency from beyond the arc. The Lehigh product drained 41.7 percent of his treys, which ranked him eighth in three-point percentage among qualified shooters.

And while it's understandable that McCollum's production would increase with more minutes, he actually showed quite a bit of improvement even when you normalize on a per-36-minute basis. The youngster averaged 15.7 points per 36 minutes in 2014-15, which jumped significantly to 21.6 points per 36 minutes during his Most Improved showing.

In other words, it wasn't just an increase in opportunity driving McCollum's improvement -- he genuinely got better as a player. Combine his breakout with the steady contributions of Lillard, and Portland's backcourt swiftly developed into one of the most reliable in basketball.

Among the free-agent acquisitions Portland signed in the aftermath of all the key departures was Al-Farouq Aminu. Fresh off a season with the Dallas Mavericks in which Aminu averaged just 5.6 points and 4.6 rebounds while shooting 41.2 percent from the floor, it was initially head-scratching to see the forward ink a four-year, $30 million contract.

It makes sense that the Trail Blazers would be interested, however, provided Olshey was the guy who drafted Aminu No. 8 overall back in 2010 with the Los Angeles Clippers.

Headed to Portland with my guy Neil Olshey, who believed in me since day one. Much love

Aminu had always been a reliable rebounder throughout the early stages of his career. But in today's NBA landscape, where spacing and outside shooting is becoming undeniably imperative from guys suiting up at the small and power forward spots, lacking that skill can be a huge hindrance to playing time.

Prior to the 2015-16 campaign, Aminu converted a measly 26.9 percent of his three-point tries over the course of the previous four seasons. It simply wasn't a weapon in his arsenal. Throughout the latest season, though, Aminu was among the league's most improved outside shooters.

Not only did Aminu make 36.1 percent of his triples, he also shot them at an exponentially higher rate than he had in seasons past. This is a clear sign that he has earned the trust of the coaching staff to let them fly, and that he has enough confidence in himself to take more long-range attempts.

Aminu performed well in the postseason last year and knocked down 7-of-11 three-pointers, but that seemed nothing more than a flash in the pan. On the contrary, Aminu proved to be one of the offseason's savviest signings -- especially if he can continue to improve over the length of his deal.

A vastly underrated aspect to team success in the NBA is continuity. Sometimes retaining the same core over a number of years (see: the Warriors' decision to not trade Klay Thompson for Kevin Love) can do more good than shuffling the deck.

The Trail Blazers didn't have that luxury this season, but it hardly mattered. Coach Stotts was able to use the pieces at his disposal to avoid a major setback -- a feat that ultimately placed him second in Coach of the Year voting.

Stotts certainly was not free of coaching snafus -- namely, starting Noah Vonleh before pivoting to insert Maurice Harkless into the starting five -- but he held his own on the sidelines for a roster that was adjusting to a variety of new roles. And, perhaps more importantly, the guys in Rip City's locker room genuinely seem to get along. Comcast Sportsnet's Jason Quick tweeted the following:

A cool trend developing with Blazers: Players staying in town over the summer to workout. Has never happened on this level before.

Every Blazers player who has spoken said they will stay in Portland to workout: Crabbe, Davis, Leonard, McCollum, and you know Dame will too

Injuries to the Clippers allowed the Blazers to advance further than they perhaps otherwise would have, but their 2015-16 season should be viewed as a sweeping success. Everyone bought in to quash the low expectations, but now the test will be building upon that accomplishment.