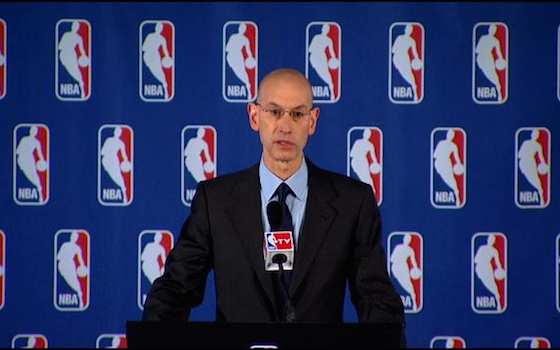 Silver also said he will urge the other NBA owners to force Sterling to sell the Clippers' franchise, noting he is confident he will get the necessary support from the owners. The sale would take a 75 percent vote of the 29 other team owners.

The Clippers owner also will be ordered to pay a $2.5 million fine, said Silver.

Silver said the money would be donated to anti-discrimination, and pro-tollerance organizations to be selected by the NBA and the players association.

In addition, the NBA commissioner said he would do everything in his power to urge the board of governors to force a sale of the team.

"I will do everything in my power to assure that happens," Silver said.

The decision came after an investigation that included an interview of Sterling, the commissioner said. Silver said the investigation concluded that "the hateful opinions voiced by the man heard in those recordings are those of Mr. Sterling."

After Silver announced the punishment, former NBA player Kevin Johnson praised the commissioner for moving swiftly to address the controversy. Johnson, now the mayor of the city of Sacramento, California, has been acting as a special adviser to the players union since the story broke.

The league moved quickly to address the scandal, which broke over the weekend when Website TMZ.com published a 10-minute recording in which a voice said to be Sterling's criticized a friend for associating with "black people."

The news prompted a wave of outrage from athletes, coaches and fans of the NBA, which was a leader in racial integration in U.S. sports and where most of the players are black.

One after another, team sponsors such as auto dealer CarMax Inc, Virgin America, State Farm, Kia Motors America, music mogul P. Diddy's water brand, AQUAHydrate, Red Bull and Yokohama Tire all announced they were stepping back from the team.

Some advertisers have asked to move their commercials out of the national broadcast of Tuesday's Clippers playoff game against the Golden State Warriors by TNT, owned by Time Warner Inc, and the local airing on a sports channel owned by 21st Century Fox, according to sources familiar with the matter.

"I don't know the bylaws of the league, but he has to go," filmmaker Spike Lee said on CNN late Monday. "He's tainted all the other 29 partners, he's tainted the league, and he's tainted America. He sees his players as slaves."

Commissioner Silver said he was personally distraught that "the views came from within and caused current and former players to question their association with the league."

"That they came from an NBA owner only heightens the damage," he added.

Sterling has a history of racism.

In 2009, the real estate mogul paid a record $2.725 million to settle a federal housing discrimination case claiming he sought to exclude black and Hispanic tenants from his rental properties in Los Angeles.

Sterling bought the Clippers for $12 million in 1981. Forbes magazine now values the franchise at $575 million.

The Clippers are now competing in the NBA playoffs. In a silent protest at their playoff game on Sunday, Clippers' players turned their warm-up suits inside out so that no team logos were showing.