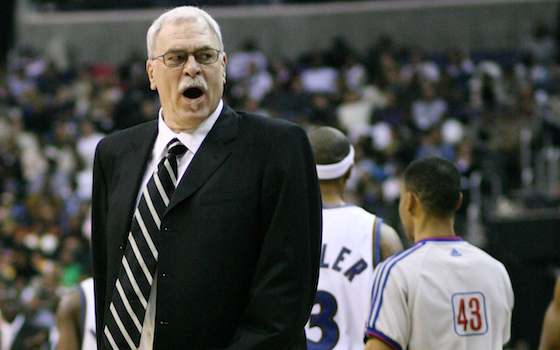 Michael Jordan is confident that his former Chicago Bulls coach Phil Jackson will succeed in his new role as president of basketball operations of the New York Knicks.

Jordan said despite Jackson's lack of executive experience, his old coach's methods and strengths can work even from a front-office position.

"Phil can do some good things with them because he's gifted," Jordan said. "Phil is fantastic at managing egos and personalities, getting everyone on the same page and maxing out whatever potential is there for what should be the common and ultimate goal.

"Just because he's never been an executive before doesn't mean he can't do that. He's wanted to do it for a while now, and I know he can do it ... so long as he has the necessary pieces in place," Jordan added.

Jordan, the chairman of the Charlotte Bobcats, said Jackson will learn the landscape of the NBA as an executive quickly. Jordan and Jackson won six titles with the Bulls.

Jackson was officially introduced as Knicks president at a news conference at Madison Square Garden.

On his first day on the job, Jackson said he looks forward to delivering a winner to New York.

"I can think of no better opportunity than the opportunities that I've had, three of the biggest cities and basketball franchises than Chicago, Los Angeles, and now to come back where I started. It's a great feeling."

Jackson confirmed that his contract is for five years. The team did not release financial details but sources said that he will receive $12 million annually.

Jackson has won a record 11 NBA titles as a coach and two as a Knicks forward. His 229 career postseason wins and 13 NBA Finals appearances are more than the Knicks have in their entire 68-season history (186 wins, 8 Finals appearances).

Can the Zen Master tame the tyrant? New York Knicks owner James Dolan, who habitually keeps his iron hand in the works of whatever the team does, has turned his attention to iconic NBA coach Phil Jackson. Jackson, who apparently isn’t interested in coaching, is said to be considering an offer to run the club as president. The one potential problem: Jackson’s big ego, and whether it can mesh with the iron hand of Dolan, known to operate on whims and blow out salary caps by shelling out superstar money to non-superstars

Phil Jackson signed on to become president of the New York Knicks for five years at $12 million annually after a lunch meeting with team officials Friday.

The deal, which does not include an ownership stake, has not been made official, but the Knicks have scheduled a news conference Tuesday for a major announcement.

Jackson will take over the running of the Knicks' basketball operations department from president and general manager Steve Mills.

In his first offseason as Knicks president, Jackson has to decide what to do with free agent-to-be Carmelo Anthony, who plans to opt out of the final year of his contract this summer.

Anthony can sign a deal with the Knicks that is one year longer and worth $33 million more than any with another team.

With or without Anthony, the Knicks are expected to be over the salary cap this summer because of the contracts of Amar'e Stoudemire ($23.4 million), Tyson Chandler ($14.6 million) and Andrea Bargnani ($11.5 million), which run through 2014-15.

Jackson probably will also have to hire a coach in the offseason as current coach Mike Woodson may be let go at the end of the season.

TNT broadcaster Steve Kerr, who played for Jackson with the Bulls, already has surfaced as one potential coaching candidate.