Karl-Anthony Towns' Rookie of the Year Season in Context 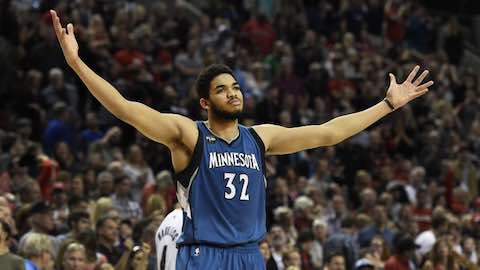 Minnesota Timberwolves center Karl-Anthony Towns won Rookie of the Year honors for the 2015-16 season. PointAfter put his ROY campaign in context -- both against his rookie peers and NBA legends who also won the award.

The Minnesota Timberwolves haven't made the playoffs since 2004 -- a 12-year postseason drought that's the longest active streak in the NBA. And yet, they're one of the league's most intriguing young teams.

Certainly not because they won 29 games in 2015-16. It's not even due to Andrew Wiggins being on the roster, nor because Tom Thibodeau was recently hired to be the team's next head coach and president of basketball operations. The key source of excitement for Minnesota basketball, rather, lies in unanimous Rookie of the Year winner Karl-Anthony Towns.

In a landscape where NBA bigs tend to adapt gradually to the pros -- in order to put on weight, develop and hone their post moves, etc. -- Towns hit the ground running. He started all 82 regular season games as a 20-year-old, averaging 18.3 points, 10.5 rebounds, two assists and 1.7 blocks, all while shooting 54.2 percent from the field and converting 34.1 percent of his three-point tries.

Despite his lack of experience, Towns was masterfully efficient from the field. His ability to knock down mid-range shots was particularly impressive. He shot 48.2 percent on shots around the free throw line and elbows -- nearly 10 percent better than league average from that zone. He shot above 47 percent from each baseline spot as well, which was again superior to the average set by his NBA peers by a wide margin.

So, how did Towns compare to his fellow rookies?

By a raw numbers perspective (average points, rebounds and assists), Towns finished comfortably ahead of the pack. Jahlil Okafor, who was second by those combined stats, only played 53 games due to injury. Towns' ability to stuff box scores was illustrated by his massive advantage in double-doubles over his fellow first-years.

Throughout his 82 games, Towns notched double-doubles in an astonishing 51 of them. Not only did that lap the field among rookies, it was the second-most double-doubles in the Association behind only Russell Westbrook (54).

Towns exceeded lofty expectations as a scorer, rebounder, shot blocker and even passer. There's clout to the argument that the youngster should make All-NBA Third Team at center. Advanced stats painted a rosy picture for Denver Nuggets center Nikola Jokic's case for ROY, but the workload Towns took on and the stability he brought to the Timberwolves put him clearly ahead in the eyes of voters.

But how did Towns' first go-around in the pros compare to other legendary big men who took home ROY honors?

On a per-game basis, Towns' numbers are closest to Derrick Coleman, the former No. 1 overall pick of the New Jersey Nets. A 6-foot-10, 230-pound lefty out of Syracuse, Coleman was selected one spot ahead of future Hall of Fame point guard Gary Payton in the 1990 NBA Draft.

Towns boasts a bigger frame (two inches taller and approximately 15 pounds heavier), and the Timberpup was a far more efficient scorer compared to Coleman as a rook. But aside from those factors, this first-year comparison is rather fitting.

Both averaged around 18 points, 10 rebounds, two assists and more than one block. Coleman also shot about 34 percent from beyond the arc, though he did take 50 fewer three-pointers as a rookie compared to Towns, so it wasn't as big a part of DC's arsenal. Still, it's fair to say Coleman was far from a post-bound center. He could step out and hit mid-range shots, just as KAT showed he was capable of doing.

If you narrow down the comparisons to stats per 36 minutes, however, a different narrative emerges.

Both "The Admiral" and Shaquille O'Neal are in a class of their own as dominant rookie big men by this measure, but Towns clearly falls into the second tier -- along with Blake Griffin, Chris Webber and Tim Duncan.

Towns notched 20.6 points, 11.7 rebounds, 2.2 assists and 1.9 blocks per 36 minutes. Those figures are much more similar to Duncan than they are to Coleman, but The Big Fundamental went 0-of-10 on threes as a rookie and never developed that skill into his repertoire. The latest No. 1 overall pick already has the ability to hit his three-point tries.

Translation: Towns is going to be ridiculously good.

With the poise he showed as a rookie and the numbers putting him on par with guys like Duncan, Griffin and others, Minny has a bonafide star on its hands.

Just to hammer that point home, the visualization below shows NBA rookies who averaged at least 18 points, 10 rebounds, two assists and 1.5 blocks.

With those qualifying factors, Towns joins only Robinson and Duncan. How's that for elite company?