The Five Unluckiest Pitchers of 2016 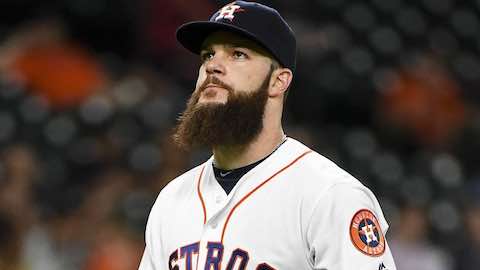 The Five Unluckiest Pitchers of 2016

The stats say these starters should be pitching better than they are. Is it bad luck, or something worse?

When baseball season was hardly a month old, I tried to diagnose the severity of bad luck that five hapless hitters had experienced to that point. With more than a third of every regular starter's outings already in the books for 2016, it's time to do the same for pitchers.

This week's edition of Weekly Rotation will use PointAfter visualizations to highlight the five pitchers with the biggest negative differences between their ERA and fielding independent pitching (FIP) this year. FIP indicates what a pitcher's ERA should be, given a league-average defense, by concentrating on what they directly control: strikeouts, walks, hit by pitches and home runs.

For these five hurlers, perhaps the most effective adjustment they could make is to increase the amount of time they spend praying to the baseball gods. Because for whatever reason, they have been frowned upon by the powers that be thus far.

Though the common thread tying together all the pitchers in this article is a large gap between ERA and FIP, the needle tugging that thread is a high strand rate (LOB%). This statistic measures the percentage of baserunners that a pitcher strands on base. The league-average LOB% tends to hover in the low seventies, according to Fangraphs, but unlucky pitchers dip into the sixties and even fifties.

Every pitcher discussed in this article ranks in the bottom 20 of strand rate. Four rank in the bottom six. Wacha has allowed more baserunners to score than all of them, possessing an MLB-worst strand rate of 57.9 percent. That distinction, combined with a career-high .323 BABIP, has led to a 4.91 ERA for the 2015 All-Star.

Wacha's subpar surface numbers virtually rule out a return to the Midsummer Classic in 2016, but the 24-year-old should find the summer months much kinder than his snakebitten spring.

Nolasco's third season with the Twins has yielded decent peripherals behind ugly on-field results. This is nothing new. When Nolasco hasn't been battling injuries for Minnesota, he's been underperforming his peripherals. The 33-year-old's ERA has been significantly higher than his FIP every year.

In fact, though Nolasco's .329 BABIP this year is considered unlucky by the approximate league average of .300, it's far better than his ghastly .385 BABIP in 37 innings last year and .354 BABIP in 159 innings in 2014. That's pretty rough, even for a guy with mediocre stuff.

Part of the blame has to fall on Minnesota's defense, which ranks 28th in defensive runs saved during Nolasco's tenure with the team. Though it might sound like a cop-out, part must be chalked up to poor fortune -- Nolasco's 59.3 percent strand rate is the second-worst in the Majors.

As the lone man remaining from Minnesota's Opening Day starting rotation -- the rest have been injured or demoted -- Nolasco could be a prime trade candidate, according to FanRag Sports' Jon Heyman. Perhaps Nolasco, a California native who's performed far worse in Target Field this year, just needs to get out of the balmy Midwest.

Peavy, a free agent this winter, has endured a nightmarish start to his contract year. The 35-year-old's fastball velocity is down to 88.8 mph after previously never dipping below 90, and hitters are clearly seeing the ball better. His 37.3 percent hard-hit rate is the fourth-highest among 101 qualified pitchers.

Still, the former Cy Young Award winner didn't quite deserve the thorough beating he took during much of the spring. Even when Peavy's current strand rate of 63.8 percent was virtually identical throughout the 2011 season, his ERA was nearly a full run lower at 4.92.

Fortunately for the Giants, their rotation's glaring weak spot has redeemed himself of late, even shutting out the Dodgers through six frames on Monday. After Peavy recorded just two quality starts in his first nine games, three of his past four outings have resulted in quality starts for a 1.82 ERA over 24.2 innings. His ERA is currently the lowest it's been this season, even if that's not saying much.

Don't get me wrong -- Keuchel has been an unequivocal disappointment in 2016. He certainly hasn't pitched like a reigning Cy Young Award winner.

That being said, he also probably shouldn't be leading the Majors in hits allowed (97) and earned runs allowed (54). In fact, Keuchel has still been a top-15 starter in the American League by FIP this season.

That's a testament to Keuchel's proven ability to miss bats, as the southpaw ranks 10th in the Junior Circuit in strikeouts.

After being the AL's only 20-game winner last year, Keuchel finds himself as the majors' only hurler with at least nine losses in 2016. Though wins and losses are among the ficklest of stats, don't expect that oddity to persist for much longer.

It wouldn't be surprising if Yankees fans were losing patience with Michael Pineda, who's mixed enticing potential with a frustrating string of injuries and inconsistency since arriving in New York prior to the 2012 season. It's not often, however, that you see a coach admonish a player to the press for his wavering performance.

Yankees pitching coach Larry Rothschild did just that in mid-May, saying, "It's easy to say it will turn, but it's been too long. … We are almost a quarter of the way through his starts. We need to straighten it out, especially in the stretch. He is going through a major bump in the road right now."

That's not exactly a vote of confidence, but Pineda has nonetheless improved in the five starts since that public dressing down. A six-inning, two-run outing on Sunday continued a run of four solid starts in five games, and the 6-foot-7 Dominican holds a 2.89 ERA in three June starts.

As for what was previously ailing Pineda? It's difficult to discern that just by looking at the numbers used widely in this piece, and has stumped others on a similar quest. Pineda ranks third in the AL in strikeouts per nine innings, doesn't walk a ton of guys or allow too much hard contact. His strand rate (67.6 percent) isn't good, but it's not disastrous, either.

Rothschild previously indicated that Pineda was too often leaving balls over the plate in pitcher's counts, giving batters too many chances at hittable pitches when they should be at his mercy. That theory seems to check out. Per Baseball Reference, Pineda has allowed hitters to record a .796 OPS after a first-pitch strike -- a better mark than Buster Posey's overall OPS in 2016. For further context, Nolasco has induced a .596 OPS from opposing hitters after an 0-1 count.

That tells us Pineda should be racking up more whiffs than he has been, a promising path forward he should find once he learns to be a bit more effectively wild. Perhaps he should be more willing to give up a walk instead of a hit with runners on base. Turns out Lady Luck tends to smile on pitchers who avoid the middle of the plate.

MORE: The 25 Best No. 1 Picks in MLB Draft History

Baseball: "The Five Unluckiest Pitchers of 2016"