Colleges That Produce the Most MLB Players 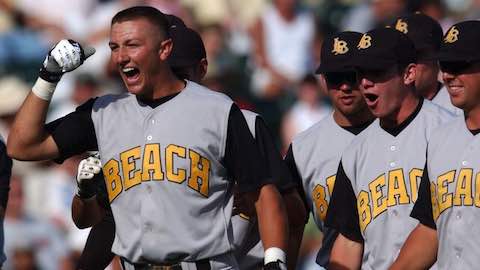 Colleges That Produce the Most MLB Players

Though Major League Baseball features plenty of high school and international talent, there are plenty of former college baseball stars on current MLB rosters. PointAfter ranked the colleges with the most active MLB players.

On April 28, the Los Angeles Rams selected Jared Goff with the No. 1 overall pick in the 2016 NFL Draft, immediately making him the face of the franchise. On June 9, the Philadelphia Phillies will make the first pick in the 2016 MLB Draft, and whoever they choose will not face the type of pressure Goff currently must deal with.

This is not just because of a perceived lack of star power in this year's draft class, but more so due to the nature of baseball. Most top prospects spend a few years in the minor leagues before ever sniffing The Show.

Further, MLB teams routinely choose high school players that few followers of the game have ever heard of. Current MLB rosters are filled with high school and international talent, and the attention paid to college baseball pales in comparison to college football or basketball.

Because of this, most active players who played in college aren't strongly identified with their schools. Still, plenty of today's stars once dominated at the NCAA level, and PointAfter found the college programs with the most active MLB players.

Because players often transfer to different schools, each player was only counted toward the last school he attended. To be considered active, players must be on a team's 25-man roster. Players with big league experience on a team's 40-man roster but currently on the disabled list were also counted towards a school's total. In all, 10 colleges have at least seven active players, and we'll work our way up until we reach the No. 1 college program, which has a dozen big leaguers on current rosters.

From Oxford to NL Rookie of the Year | PointAfter

Nola was a two-time winner of the SEC Pitcher of the Year Award and was the No. 7 pick in the 2014 draft. LeMahieu was a member of the Tigers' national championship-winning team in 2009 and was a second-round pick by the Cubs in the 2009 draft. He made his first All-Star appearance in 2015.

O'Day was undrafted out of college but has become one of the best relief pitchers in baseball, making his first All-Star appearance in 2015. Ross was drafted in the seventh round in 1998 and won the 2013 World Series as a member of the Red Sox.

Street was a member of the Longhorns' 2002 College World Series championship team and won the 2005 AL Rookie of the Year Award. He has made two All-Star appearances in his career and recorded his 300th save on July 22, 2015.

Star Power from The U | PointAfter

Price won the Golden Spikes Award and the Dick Howser Trophy as a junior and was the No. 1 overall pick in the 2007 draft. He's made five All-Star appearances and won the 2012 AL Cy Young Award as a member of the Rays.

The MVP from Tempe | PointAfter

With a dozen current big leaguers, the Dirtbags are the most represented program in today's MLB landscape. Weaver won the Golden Spikes Award and Dick Howser Trophy in 2004. Tulowitzki (No. 7 in 2005) and Longoria (No. 3 in 2006) are the only top-10 picks from Long Beach State currently in the pros.

Baseball: "Colleges That Produce the Most MLB Players"