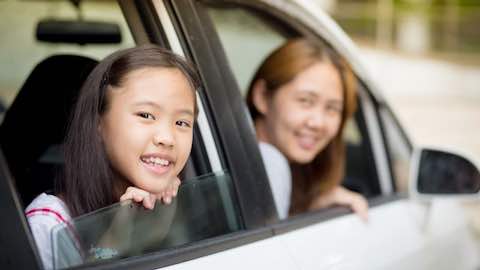 Minivans are extremely practical, but most would agree that they are severely lacking in the "cool" department. Jeremy Clarkson, a host of the prolific motoring show "Top Gear," is not hesitant to express his disdain for the minivan, nicknamed a "people-carrier" in the U.K.. By Clarkson's logic, there are plenty of other options for shuttling children that are safer, better to drive and a little more exciting to show to your friends.

The car experts at AxleGeeks had to agree, and set out to find the best new cars for "soccer moms" who want something practical, but with a bit more sex appeal than the minivan. We ranked the 10 best SUVs of 2016 using Graphiq Smart Ratings, leveraging data from Edmunds.com.

Only base models with standard third row seating were considered for the list. In the event of a smart ratings tie, the car with the lower MSRP was ranked higher.

The Volvo XC90 bests peer averages across several categories. With 400 horsepower, it is 33 percent more powerful than other cars in its class, doing 0-60 in just 5.3 seconds and still achieving a combined 25 mpg. Additionally, the 2016 XC90 received an IIHS Top Safety Pick+ award.

Achieving a combined 27 mpg, the 2016 Toyota Highlander Hybrid has a 23 percent advantage over comparable cars. It also ranked 3rd place in the Kelley Blue Book Resale Value Award for Hybrid SUV/Crossover, and received a 5-star overall crash test rating from the IIHS.

At $29,990, the standard model 2016 Highlander is $17,880 cheaper than the hybrid version. Assuming a fuel cost of $3 per gallon, you could drive nearly 6,000 miles with these savings. The 2016 Highlander also received a 5-star overall crash test rating from the IIHS.

The 2016 MDX is $12,250 cheaper than the average for Midsize Luxury SUV/Crossovers. Additionally, the car was awarded a 5-star overall crash test rating from the IIHS, which named the car a Top Safety Pick+.

The Explorer is $3,800 cheaper than average for cars in its class. Additionally, it received a 5-star overall crash test rating from the IIHS. The 2016 Explorer also won Kelley Blue Book's 5-Year Cost to Own Award, and came in third place for their Resale Value Award for Full-Size SUV/Crossovers.

Starting at $22,995, the 2016 Outlander is not only the least expensive car on this list, it is also $11,885 less than the average for the Midsize SUV/Crossover category. It was also an IIHS Top Safety Pick+.

The 2016 Pilot takes the cake for best new car for soccer moms. With a Graphiq Smart Rating of 100, the car excels in virtually every measure. It has above-average horsepower and fuel efficiency, and is cheaper than other cars in its class. The 2016 Pilot was also given a 5-star overall crash test rating and was recognized as a Top Safety Pick+ by the IIHS.

With two vehicles in the top four spots, Honda (the parent company of Acura) takes home the prize for best car brand for busy parents. Their vehicles are both cheaper and safer than the averages in their categories -- of particular note is the fact that 100 percent of Acura's vehicles have been given 5-star safety ratings by the IIHS. Toyota, the parent company of Lexus, is the most represented manufacturer on the list, making them an honorable mention for the category. Meanwhile, the practical and affordable Mitsubishi Outlander gives stylish soccer moms the most bang for their buck.