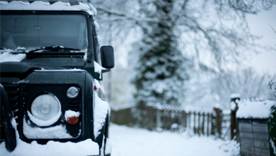 Over the past several years, a new vacation week has been making its way onto many families’ calendars. Sometimes sanctioned by school districts and sometimes not, this new week -- which is usually tucked deep into February or early March -- is commonly called Ski Week. Embedded in two months known primarily for their dreary weather, the holiday has become a welcome relief to families across the country, offering them a chance to exercise some muscles that may otherwise fall into doldrums during the long, cold winter.

Of course, if you are going to make the best use of Ski Week, you need a vehicle that can get you up the mountain and back down again in style, comfort and safety. To help you identify the finest Ski Week vehicles, our editors have put their collective minds together to highlight the ones we believe are the best of the best.

Certainly the word Jeep has a ringing connotation when it comes to all-weather, four-wheel-drive vehicles, so it should be no surprise that the Jeep Grand Cherokee is on this list. All-new for 2011, it was one of Chrysler’s final collaborations with former owner Daimler-Benz, and the heritage is obvious. Unlike several others on this list, the Grand Cherokee will seat just five, not seven or eight -- but those five will find a cabin as rich as a luxury SUV and a level of refinement that has hit a high-water mark for the brand. Powered by a newly designed 290-horsepower 3.6-liter V-6, and boasting Jeep’s well-honed inclement-weather capabilities, the Grand Cherokee is a consensus pick as a Ski Week vehicle.

While the Jeep Grand Cherokee is to many an obvious choice as a Ski Week vehicle, the Honda Pilot is far less so. But having experienced its considerable virtues during a ski vacation blizzard as recently as this past Christmas, we can attest to the fact that the Pilot has all the features it needs to get to and from a snowbound resort. With flexible seating for up to eight, and with more cargo room than you may guess, the Pilot is great for family transport. Its 250-horsepower V-TEC V-6 delivers ample power, and its four-wheel-drive system is both robust and sophisticated.

Back in the ’80s, the Ford Explorer was the lead vehicle in the rise of the SUV segment. Now, nearly three decades later, it has been completely transformed from a truck-based vehicle to a unibody crossover -- while still retaining and enhancing its four-wheel-drive credentials. The complete makeover was instituted to deliver better handling and higher fuel economy, and it was a success on both counts -- so successful that it was recently named North American Truck of the Year. Its fuel economy tops the segment, despite the fact that its 3.5-liter V-6 offers a robust 290 horsepower, and its easy-to-operate all-terrain system takes the worry out of off-road situations.

Audi was very late to introduce a crossover SUV, which baffled many people because of its long history creating great vehicles with its patented Quattro all-wheel-drive systems. The good news is that when Audi did introduce its Q7 crossover, it got it right. This is a vehicle that features Audi’s beautifully tailored interior and exterior design -- combined with a large dose of practicality. For instance, the seats can be arranged 28 different ways, and there are 72 cubic feet of cargo space. The Q7 relies on supercharging to bring its 3-liter V-6 up to 272 horsepower, but it is accompanied by a sophisticated 8-speed Tiptronic automatic transmission and Quattro all-wheel drive.

Crossovers are nice. They offer good driving dynamics and a reasonably compact size. That being said, when it comes to spending Ski Week with the family, there is a lot to like about a full-sized, truck-based SUV like the Chevrolet Tahoe. The interior is significantly roomier than in the above-cited crossovers, yet fuel economy is only a mile-per-gallon or so poorer. The Tahoe is not as nimble as the others on this list -- but with 320 horsepower from its 5.3 V-8, the Tahoe has the hauling ability to get you and all your gear to the lifts and back in limousine-like comfort.

Luigi Fraschini is a Driving Today contributing editor based in Cleveland. He writes frequently about auto safety and other auto-related issues.